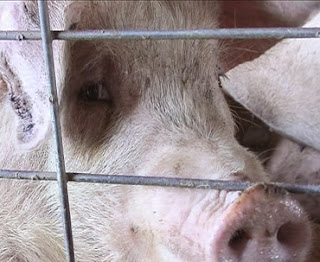 The Handle with Care Coalition -- a World Federation for the Protection of Animals led global coalition representing leading national and international animal welfare organizations -- recently completed a two-year-long investigation to expose the brutality of long distance transport for slaughter.

What they discovered is that Canada is responsible for one of the harshest transportation ordeals for livestock in the entire world.

According to their release:

One of the longest, cruellest, most gruelling journeys ever faced by pigs, actually begins right here in Canada. Every year 10,000 - 15,000 pigs from Hutterite farms in Alberta are forced to endure a seven to nine day trip by land and by sea from Alberta to Hawaii. These unfortunate pigs are never once unloaded to the ground for rest during their entire ordeal. Confined to cramped, filthy containers, they are forced to lie in their own faeces, urine and vomit and may go long periods of time without food or water. Shortly after their arrival, the pigs are slaughtered and the meat is sold to unsuspecting locals and tourists as "Island Produced" pork.

Read more here. If you live in Canada you can do something about it by clicking here.
Posted by George at 2/13/2008