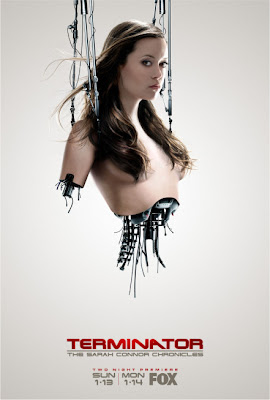 Like most science fiction on television these days, the new Terminator show is virtually unwatchable. That said, they correctly introduced futurist lingo into the story.

At one point in the episode "The Turk," John Connor tells his mom, Sarah Connor, about the Singularity and describes it as a point in time when machines are able to build superior versions of themselves without the aid of humans--after which point they can pretty much kiss their asses goodbye.

That's just about right, actually. And I've always found the Terminator future to be one of the more disturbing dystopic visions. Given the potential for robotic armies and greater-than-human artificial intelligences, one has to pause for thought...
Posted by George at 2/02/2008

indeed, I also caught my self at that episode in that particular moment thinking - wtf...

I've always felt the opposite about the Terminator future; much like the Matrix future, I don't understand what stops the machines from continuing their development. They're true AI, thus their brains operate a million times faster than human brains. Where's the intelligence explosion that would, it seems to me, inevitably result?

Faster in what sense? The fastest supercomputers in the world aren't all that much more capable than a human brain in processing so many bits of information in a given time. As time goes by, I'm sure we'll be able to add cognitive capabilities for which the brain is poorly designed (floating point math, for example, or true Newtonian physics) and even add to the total function space subsumed under a single self, but "true AI" doesn't seem likely to start out so different from its parents. Further, the continual insistence on the language of "them" and "us" is, while perhaps inevitable, also quite regrettable. If there's anything one can learn from George's blog and transhumanism in general, it's that humans are always already technological, and there's no hard and fast distinction between the natural and the artificial, including in intelligence. Yes, we can talk about our children as "they," but they are also "we".

I agree that a lot of the science fiction on TV is unwatchable.

Rather than simply being awful I have a running commentary in my head going "that's completely implausible" or "why didn't the writers do it like this?

I also agree with nato about the "them" and "us" language.

I recommend James Martin's recent book "The Meaning of the 21st Century" in which he discusses (amongst an awful lot of other things) the idea of "non-human intelligence."

NHI would be like software that uses evolutionary methods to improve itself and design new software and artefacts.

Then there is the more subtle point that a human mind instantiated within an artificial computer would be human. It could potentially run much faster, but (to quote Agent Johnson from The Matrix Reloaded [which I always rather liked, despite what everyone said]) would still be "only human" as far as thought processes are concerned.