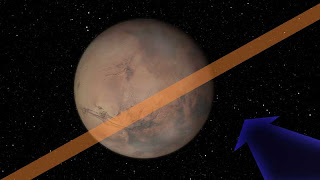 The red planet could really get smucked in late January.

Those odds are astronomically high by, uh, astronomical standards. That's a 1 in 25 chance. The uncertainty region during the Mars encounter now extends over 400,000 km along a very narrow ellipsoid that is only 600 km wide. The time of impact is estimated to be January 30, 2008 at 10:56 UT (5:56 a.m. EST) with an uncertainty of a few minutes.

Asteroid 2007 WD5 measures more than 160 feet in diameter and is traveling towards Mars at a speed of 30,000 miles per hour. Initial calculations show that it may crash in the equatorial region creating a crater more than a kilometer in diameter. The release of energy would be similar to the 1908 Tunguska object that exploded over remote central Siberia and wiped out 60 million trees.

According to Dr Arvind Pranjpe, professor at the Inter University Centre for Astronomy and Astrophysics (IUCCA), "If 2007WD5 indeed crashes onto Mars, it will be a big moment for scientists. The impact of the explosion, and the dust storm it will kick up will all be closely studied. It will give us a chance to study a freshly created crater, which is rare."

There would be no effect on Earth should the asteroid hit Mars.

Except, of course, for the impact on our nerves. Asteroid 2007 WD5 was only discovered 2 months ago. Had it been heading towards Earth, we would have been utterly helpless to respond.

The asteroid was discovered on November 20, 2007 by NASA-funded Catlina Sky Survey, an organization that is a part of NASA's Near Earth Program which looks out for astronomical bodies coming close to the Earth.

In the future, should a similar threat face Earth (like Apophis), we might be able to nudge NEOs out of the way.
Posted by George at 12/31/2007