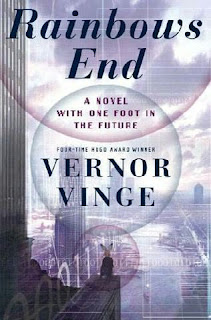 A fine novel, if I may say so. I'll be very interested to hear your opinions on the subject matter when you've finished it; without giving anything away, there are lots of ideas in there that match up with some of your favoured topics here at SentDev.

Hey George. I read this about a year ago or so... Also enjoyed it alot. Sort of near future sci-fi... Its funny, I was actually thinking of it today, was sitting in a meeting wishing that I could just make a copy of myself to whip off into cyberspace and do interesting stuff while the meatspace me sat there through the meeting, pretending to be interested, then I could watch in fast forward later on... :)

Having spent a lot of time on the UCSD campus I enjoyed the scenes there. I was also impressed at how advanced the study topics were for the child protagonists--and they were supposedly not even attending one of the better schools.

One can only hope that the pre-secondary and secondary educational systems can grow that much over such a short time period. I have my doubts, given past experience.

I'm halfway through it, coincidentally. Of Vinge's other work, I've only read Marooned in Realtime, but this novel definitely has a different feel to it. He seems to be more occupied with the technology this time around, but I wouldn't say it takes away from the story. Looking forward to your review.

George,
I too would be interested in your thoughts on this book. I read it about 6 months ago and found it quite thought provoking. Interestingly I had just been corresponding with Dr. Vinge regarding his "What if the Singularity Does Not Happen" article -in addition to being polymathically brilliant he is a
wonderfully approachable guy.
BTW - I've been loving your blog and podcasts for the past year or so - a bit of light in the general darkness.
I wouldn't presume to guess your taste in literature, but I think that you might like Richard Morgan's new novel "Thirteen"....
Thanks for all your efforts!
Major David Grundy,
U.S. Army MEDCOM

Hey David, thanks for the recommendation. I'll put it on the list! My next book will be "Immortality" by Kevin Bohacz. And then I want to read Aubrey's new book...