Arecibo Observatory in danger of being shut down 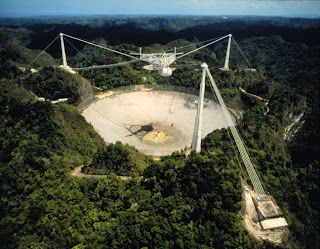 Bad news: Looks like the Arecibo Observatory in Puerto Rico may be shut down due to budget cuts.

This would be a heavy blow to the scientific community. In addition to the SETI project, the Observatory has amassed decades worth of data about the cosmos, it has mapped the surfaces and interiors of neighboring planets, and is the only facility on the planet able to track NEO's with enough precision to tell which ones might strike the Earth.

From the Washington Post article, "Radio Telescope And Its Budget Hang in the Balance":

The National Science Foundation, which has long funded the dish, has told the Cornell University-operated facility that it will have to close if it cannot find outside sources for half of its already reduced $8 million budget in the next three years -- an ultimatum that has sent ripples of despair through the scientific community.

The squeeze is part of a larger effort to free up money for new ventures in astronomy -- projects that even Arecibo's depressed staff agrees ought to be launched. But many astronomers say that if Arecibo succumbs, the cause of death will be politics, not a lack of good science.

They note that states with major observatories, such as New Mexico and West Virginia, have senators famous for their power over purse strings, some of whom are already gearing up to fight proposed cuts. By contrast, Puerto Rico, a commonwealth of the United States, has no senators. And its representative in the House, Resident Commissioner Luis G. Fortu?o (R), does not have a vote.

You can petition your congressional representatives to save the Arecibo Observatory by signing a petition letter here: