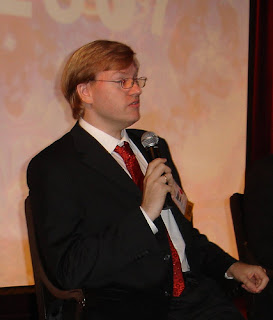 Transhumanists have long speculated about the possibility of uploading a brain into a computer. In fact, a big part of the supposed posthuman future depends on it.

Soooo, how the hell do we do it?

This is the issue that Swedish neuroscientist Anders Sandberg tackled for his talk at TransVision 2007. Uploading, or what Sandberg refers to as ‘whole brain emulation,’ has become a distinct possibility arising from the feasibility of the functionalist paradigm and steady advances in computer science. Sandberg says we need a strategic plan to get going.

Sandberg also outlined the various levels of necessary detail; we can already start to parse through the “known unknown.” He asked, “what level of description is necessary to capture enough of a particular brain to mimic its function?”

He described several tiers that will require vastly more detail:

Sandberg believes that the ability to scan an existing brain will be necessary. What will also be required is the proper scanning resolution. Once we can peer down to the sufficient detail, we should be able to construct a brain model; we will then be required to infer structure and low-level function.

Once this is done we can think about running a brain emulation. Requirements here will include a computational neuroscience model and the requisite computer hardware. Sandberg noted that body and environment simulations may be added to the emulation; the brain emulator, body simulator and environment simulator would be daisy-chained to each other to create the sufficient interactive link. The developers will also have to devise a way to validate their observations and results.

Neural simulations are nothing new. Hodgkin and Huxley began working on these sorts of problems way back in 1952. The trick is to perfectly simulate neurons, neuron parts, synapses and chemical pathways. According to Sandberg, we are approaching 1-1 for certain systems, including the lamprey spinal cord and lobster ganglia.

Compartment models are also being developed with miniscule time and space resolutions. The current record is 22 million 6-compartment neurons, 11 billion synapses, and a simulation length of one second real-time. Sandberg cited advances made by the development of IBM’s Blue Gene.

Reverse engineering is all fine and well, suggested Sandberg, but how much function can be deduced from morphology (for example)?

In regards to scanning, we'll need to determine the kind of resolution and data needed. Sandberg argued that nondestructive scanning will be unlikely; MRIs have been the closest thus far but are limited to less than 7.7 micrometers resolution. More realistically, destructive scanning will likely be used; Sandberg noted such procedures as fixation and ‘slice and scan.’

Once scanning is complete the postprocessing can begin. Developers at this stage will be left wondering about the nature of the neurons and how they are all connected.

Given advances in computation, Sandberg predicted that whole brain emulation may arrive sometime between 2020 and 2060. As for environment and body simulation, we’ll have to wait until we have 100 terraflops at our disposal. We’ll also need a resolution of 5x5x50nm to do meaningful work.

Sandberg made mention of funding and the difficultly of finding scan targets. He named some subfields that lack drivers, namely basic neuroscience, electrophysiology, and large scale scanning (so far). He did see synergies arising from the ongoing development and industrialization of neuroscience, robotics and all the various –omics studies.

Would the expectation be that if you can get the mechanical brain to think like a human it would then behave like one? OR, Would behaving like a human be a core element with the thoughts justifying the behavior. OR, Are there no thoughts, just behavior?

OR, Do you begin with some sort of fetal brain environment? And if you do, do you have to mimic a process of growth and learning?

OR, Is the supposition, really, that we might be able to simulate a twin if we can proportionalize all the features of an existing-person's brain and, somehow, get all the settings right?

Would a first step be to, say, emulate a tulip? How difficult would it be to take a tulip bulb, emulate that, and then see if the real and virtual things grow to be extrodinarily similar plants?

Am I making a fool of myself with my questions? My brain's small. Sandberg can have mine if he wants it. God knows ... I mean, Nobody knows I'm not doing anything with it.

I have grave concerns about this. We have proof already that it's possible. You only have to look at the person standing next to you for that. I'm one of those who is also convinced it's desirable. My concerns are about the complexity.

Anders' description is complex enough, but I do suspect that when we get down to it, we're going to discover a shed load of complexities we never even dreamed of.

I won't pretend for a moment that I have the faintest idea what those complexities will turn out to be, but I will venture an example.

For a long time, philosophers have mused over the question of free will. Do we have it? If we do, how so, when physics seems to point to the opposite conclusion? And how do we explain the fact that we have a subjective experience of reality, a consciousness, at all? What if it turns out that free will isn't an illusion, but comes about through an interaction of "spirit" (whatwever that is!) with physics, perhaps occuring at a quantum level in a way that we are mistaking for randomness?

Oh, and so many other questions.

Brace yourselves for this taking a long time.