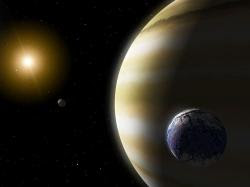 Wow, the blogosphere has been absolutely gushing these past few days over the news that an Earth-like planet may have been discovered in the 'hood. This planet may boast a moderate climate that could conceivably support life and is only 20 light years away.

Not surprisingly, this news has caused a number of pundits to fantasize about jumping into their rocketships and bidding adiós to our polluted, war-torn and diseased planet.

But not so fast, amigos. While many have misguidedly jumped on the bandwagon to the stars, a number of bloggers have gotten it right.

In his article, "'Don't Pack Your Bags Just Yet", Jamais Cascio notes that, "By the time we have the technology that would make a 20 light year trip even remotely plausible (the fastest space craft yet made would still take thousands of years to get there), we probably won't be all that interested in living in a watery gravity hole anyway. Nope -- give us some nice, massive gas giants to convert to computronium!"

Michael Anissimov points out that we have a human hospitable planet right here that we’ve barely even begun to use. He also argues that "even if we did need to leave the Earth, there is a tremendous amount of raw materials for space colonies right next door in the form of carbonaceous asteroids, which make up about 75% of known asteroids." Moreover, warns Anissimov, "we should think carefully before sending off colonists to far-away places without ensuring that they’re capable of protecting the fundamental freedoms of their citizens." Specifically, he worries that a blight may come back to haunt us (which also reminds me of the Honored Matres of the Dune series).

And as Tyler Cowen noted, "Are earth-like planets so common? That probably means lots more civilization-supporting planets than I had expected. But where are the alien visitors? As suggested by the Fermi paradox, we must revise our priors along several margins, one of which is the expected duration of an intelligent civilization."

Indeed, Cowen is on the right track. A primary argument used to reconcile the Fermi Paradox is the Rare Earth Hypothesis. This line of reasoning suggests that we haven't been visited by ETI's because life is far too rare in the cosmos.

But if we have discovered an Earth-like planet as little as 20 light years away, it's not unreasonable to suggest that our Galaxy must be absolutely teeming with life. This would seem to be a heavy blow to the REH.

So why is this bad news? It's bad news because our biophilic universe should be saturated with advanced intelligence by now...but it's not. The Fermi Paradox is very much in effect as a profound and disturbing unsolved mystery in astrosociobiology, philosophy and futurism.

Are all civilizations doomed before getting to the Singularity? Or is there something else at work here?
Posted by George at 4/26/2007

All we know about this planet so far is that it's in a temperature range where liquid water could exist (unless it's tidally locked due to its close proximity to its star and doesn't rotate, which is possible). It's a long way from there to "Earthlike". We don't know whether there actually is any water, or any atmosphere, or what kinds of chemicals are abundant on the surface, or how frequent asteroid and comet impacts are on the planets of that system, or whether it has a strong enough magnetic field to shield the surface from cosmic rays which would destroy organic compounds, or any of dozens of other things we would have to know before declaring the planet a plausible candidate for the evolution of complex life.

As I said in an earlier discussion here, I think the solution to Fermi's paradox is that environments suitable for the development of complex life are far rarer in the universe than we used to assume. Discovering this planet tells us nothing new about how likely that is. Random chance dictates that planets within the "habitable zones" of their stars will be fairly common. All that has happened is that we've finally actually seen one.

I think the Fermi Paradox has lost most of its relevance. One of the many assumptions that it's built on is that curious ETs would have to send a vessel into our system in order to observe us.

We now know that sending physical vessels out to explore the galaxy at sublight speeds is an extremely inefficient and time consuming way of doing things. Curious ETs can sit back in their home systems and gather pretty much all the information they need from massive arrays of sensors.

I don't doubt that if curious, advanced civilizations do exsist they already know all about us. The fact that they haven't contacted us might indicate that they're waiting for us to notice them and initiate contact on our own terms. It makes a certain kind of sense, it's the same kind of approach that Diane Fossey used.

The other assumption built into the Fermi Paradox is that advanced ETs would behave much like Europeans did over the past six hundred years in physicaly extending their influence over all the real estate they could get their hands on. We can't rule such a scenario out of course but it seems foolish at this stage to assume that the lack of evidence of such behaviour means anything.

I think your thoughts and those of the previous commentors are quite right, however, the inquisitive, excitable child in me can't help but be thrilled at this discovery. The challenges of getting there currently lie in the "yeah-right" sphere, but to have something *this* Earth like this close to us is wonderful news. And in the spectrum of planetary categories, Infidel753, this is the closest we've got.

As to ETI's knowing about us, how far have our signals gotten out there? 100-200 light years away at max? Even if they're looking, chances are they're not going to know about us anytime "soon."

I think applying human reasoning to the cognitive patterns of nonhuman sentients smacks faaaaaaar too much of knee-jerk anthropocentrism to be particularly relevant. Even if technological civilizations are all destined to eventually encounter a Singularity point simply because technological evolution always leads to that, reasoning how they would endure their own Singularities based on terrestrial models of our own potentials is completely and utterly flawed.

But let's assume, for the moment, that all sentient species behave roughly like humans. Human cognition is ultimately a fairly conservative process--when a human entity is perfectly satisfied with or adapted to its environs it A) rarely evolves further (consider the coelacanth); or B) has no need to venture beyond its safe, comfortable environs either mentally or physically. I think it likely that Accelerated species simply find no reason whatsoever to leave their home stellar systems unless their star is going to explode...at which point, they just move one star over to another star that can afford their computronium systems a steady energy supply. Once you've achieved "heaven" in a vast array of virtual scapes that can, literally, provide ANY AND ALL environments its inhabitants could ever dream of occupying...what use is exploring or facing the dangers of the surrounding universe? Better to just disappear into your computronium scapes and not worry about the Outside World until your star starts to burn out.

If superintelligences plan to continue after their star runs out of energy, then they would alter or encapsulate other stars that are pouring their energy into the interstellar voids. http://www.nickbostrom.com/astronomical/waste.html

Distributing copies of their civilization across enormous distances would reduce their risk from existential risks like vacuum phase transitions or UFAI expansion wavefronts.

If colonization wavefronts spread at very close to the speed of light, and preclude the independent evolution of entities like ourselves (outside simulations and the like) then we should find ourselves in a visibly barren universe, outside the future light-cones of Singularities, even if technological civilizations arise relatively frequently. A large portion of observable galaxies may have already been turned into computronium during the time their light traveled to reach us.