Is the world ready for cyborg athletes? 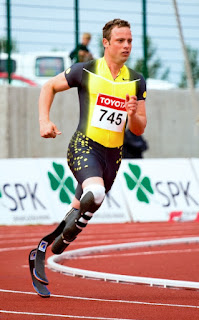 Look out professional athletes, here come the cyborgs -- and they're aiming for the Olympics.

But speed is not his problem. As it turns out, his prosthetic limbs have become a matter of great contention. Consequently, Pistorius, or 'Blade Runner' as he's called, has more to contend with than just his disability.

The International Association of Athletics Federations (IAAF) recently concluded that Pistorius's artificial legs give him a decided advantage over athletes who run with naturally endowed legs. He is using what they have termed a "technical aid." Subsequently, Pistorius is not eligible to compete at the 2008 Olympics should he qualify.

Pistorius sees this as a form of discrimination. He argues that his sprinting talents are latent and the result of his hard work and dedication to the sport. "There's a fear of change," he says.

That said, the IAAF has a point. Pistorius's artificial legs have been dubbed 'cheetahs' -- and not by accident. They resemble blades more than feet, allowing Pistorius to take long strides as he springs from step to step. Some claim that his strides are as long as three to four meters. This is no attempt to mimic normal human running; it's a new form of locomotion altogether.

Pistorius and his team argue that this is nonsense, that the blades couldn't possibly offer such an advantage.

The end of normal human functioning in sports 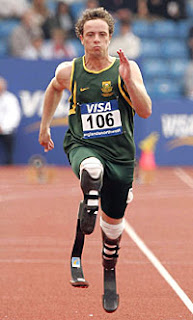 This issue is a snap-shot into the future of sports. Governing bodies will have much more to contend with than just performance enhancing drugs. Technological endowments, particularly those that are cybernetic in nature, are poised to upset the apple cart that is professional sports.

The Pistorius issue is a case in point. The IAAF was compelled to created a new rule stating that "the use of any technical device that incorporates, springs, wheels, etc is forbidden." They argue that these endowments change the nature and spirit of sporting events to an unacceptable degree. This is undoubtedly a precursor to future rulings that may ban genetic modifications, cognitive enhancements, and cybernetic implants.

Looking at it from another perspective, established sports like the 100 meter dash assume a specific morphology, namely that of a normal functioning human. Athletes can use subtle methods to improve their performance, whether they be expertly designed running shoes or highly refined techniques.

But there is something inherently unsatisfactory about all of this. A certain arbitrariness exists when it comes to determining which technologies are acceptable and which are not. Moreover, given the strong likelihood that advanced prosthetics will greatly surpass what is natural, at what point do we concede defeat and allow 'cyborgs' to compete alongside 'naturals?' Are groups like the IAAF discriminatory by insisting that para-athletes conform to 'normal' human morphology?

And given the 'arms race' nature of competition, will these positional advantages cause athletes to do something as seemingly radical as having their healthy natural limbs replaced by artificial ones? Is it self-mutilation when you're getting a better limb?

The advent and application of cybernetic technologies will redefine what has typically been regarded as normal human functioning. Future humans, as they adopt novel sensory and physical endowments, will establish new modes of living and being. This will in turn normalize within society and become the dynamic norm.

The long term impact of enhancement in sports, however, is still unclear. There may be schisms within specific sports causing the emergence of rival leagues. There may be leagues for enhanced athletes and those for 'naturals.' Over time, however, the naturals will increasingly appear anachronistic.

Imagine a hockey team that communicates techlepathically, or basketball players with improved peripheral vision. There could be ambidextrous switch pitchers and skeet shooters with enhanced visual fields.

As for Pistorius and his particular dilemma, I agree with the IAAF. He should not compete with normal humans. Instead, he should continue to race against other para-athletes and keep pushing the envelope of what is physically possible.

Eventually, performances by cyborgs will surpass those of unaugmented humans. It's the disabled, after all, who will inherit the earth.

Here's a video clip of Pistorius in action:

An thought provoking post. That's the first time that I've heard of prosthetic legs being regarded as an advantage over natural ones.

To avoid this arbitrariness of which equipment to ban, perhaps their should be a return to competing in the nude.

I think that all competitions, whether they are car races or tests of human speed and enduance always contains "arbitrary" rules. The winner is only ever the winner under these pre-set conditions. Those who rule over the event will decide what qualifications are open to be maximized. From reading this, I'm more inclined to think of human lopping off their own limbs for practicality rather than glory.