US accountability in Iraq 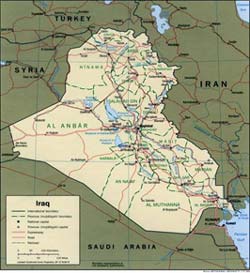 Now that the Hindenburg that is the Republican party is quickly collapsing, a number of Americans are hopeful that their troops can be recalled from Iraq.

I'd like to take this opportunity to remind these particular Americans that they started this bloody mess -- illegally I might add -- and they better be prepared to see this one through to its completion.

Leaving Iraq at this particular point in time would be a catastrophe. The country currently sits on the brink of civil war, with Shias and Sunnis ready to pounce at each other's throats. There is a better than excellent chance that a full-out civil war would erupt followed by the fall of the current regime should the US presence be removed. A fundamentalist regime along the lines of Iran would likely follow suit, a problem that the US would have to eventually deal with at any rate.

I have two prescriptions for the situation.

First, the US needs to put more effort into the Iraqi occupation; what's required is more money, more troops, better organization, and a clear direction for ensuring both short-term and long-term stability. Important facets to this re-organization would be the establishment of a tougher regime that is stubbornly secular in nature but at the same time tolerant of religious plurality. The US also needs to invoke an economic restructuring plan along the lines of post-war Germany's Marshal Plan (and not this half-assed moping around that's the current story). Where Saddam Hussein kept opposing Shia and Sunni forces in check by applying an iron fist, the Americans can hope to achieve the same degree of stability by establishing strong and sound institutions and by helping the Iraqi people re-build their economic infrastructure.

Second, because this is a humanitarian problem, the rest of the world needs to become involved and help. This US should not be expected to deal with Iraq on its own -- even if it did attack the country without the support of the UN's Security Council. The UN, which is already outstretched in places like Afghanistan, needs to play a part, but it requires much greater global support than it is currently receiving.

These two strategies would cost more money and resources, but would most assuredly result in fewer lives lost (both Iraqi and American) and go a far way to ensure long-term stability in Iraq -- and by consequence to the entire region.

In a perfect world the Iraqi people could solve their domestic problems on their own, but this is far from a perfect world. I look at any ongoing presence in Iraq as nothing more or less than a humanitarian project -- not unlike the types of campaigns that are frequently called for to deal with sectarian and racial violence in Africa.

The unprecedented electoral success of the Democrats does not excuse the United States from their actions and current responsibilities in Iraq. I hope a policy like the one I described will be considered and put into place by the Democratic Party and the greater international community.
Posted by George at 11/09/2006

I must comment that calling the war illegal has little use except as an insult.

In order for laws to mean anything, they must be enforced, or at least have the potential to be. If one can announce to the world how, when, and where they intend to commit a crime, proceed with that crime, and yet face no reprisal at all, then whatever 'law' is being broken clearly has no meaning in reality.

As far as establishing a tougher, secular regime, I'm not sure how practical that is. The Iraqi government, weak as it is, has already been established. For the coalition to undo or undermine that and go back to installing leaders of their choice again would further stretch their credibility...assuming they really have any left.

Laws have meaning outside of their ability to be enforced. In this case, it's the spirit of international co-operation and multi-lateral decision making that's being violated. Moreover, an immoral act is still immoral even if you can get away with it.

As for the tougher regime, here's what I would do: I would retain the current government, but suspend elections until further notice and impose martial law. The neo-con idea that you can just go in and set up a democracy and everything will take care of itself is sheer nonsense and ideological wishful thinking.

Then, in conjunction with the occupying forces, I would work on creating a strong internal military and police force to maintain order, to protect the government, and to instill a sense of order and authority on the public.

Actually Saddam's regime was stubbornly secular, and certainly tough. It sounds like you're advocating the rise of a new Iraqi strong man (who presumably can be knocked down again when he starts acting outside his remit).

Many of the commentators which I've heard over the years have had little knowledge of history. Based upon historical precedents, I'd predict that flooding the country with US military would not resolve the problem and would instead ferment further violence. Furthermore such an esculation of the occupation would be unlikely to be very popular with US (or British) taxpayers.

In my opinion the stoic idea of "seeing the job through" is based upon a naive analysis of the situation. As I see it the only viable option is withdrawal, followed by a period of civil war, followed by peace. For a historical parallel see what happened in the Balkans in the 1990s.