The U.S. plan for a 21st century nuclear blitzkrieg 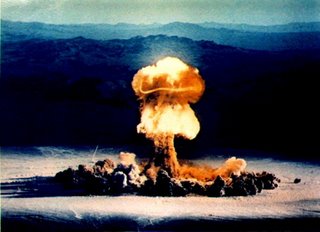 Strangely, the end of the Cold War, for whatever reason, ended the global impetus behind the development and enforcement of non-proliferation treaties for nuclear weapons. The current North Korean situation, and soon to be Iranian situation, is an example of inexorable technological globalization. It is also symptomatic of the current nation-state era, in which geographical regions claim political, economic and militaristic sovereignty; each country claims that it has the right to develop nuclear weapons and to protect itself.

As a number of commentators have pointed out, the fact that North Korea has joined the Nuclear Club is a joke of horrendous proportions. This is exactly the situation that was feared back in the mid-40's when nuclear weapons first emerged. Nuclear weapons have not been used in combat since World War II, but that should not be taken as an indication that they will never be used again. That said, there may be some very good reasons for their non-use during the course of the past sixty years.

Theory suggests that full-out nuclear war is highly improbable between nuclear capable countries -- an assumption based on the idea that nations are self-preserving rational actors – namely the mutually assured destruction concept. This idea, which is really a strategy to create deterrent, is a real-world application of the game theoretic Nash Equilibrium, in which both sides attempt to avoid their worst possible outcome — nuclear annihilation.

I can't be certain that the twisted communist regime under Kim Jong-Il is such a rational actor, nor can I be certain about Ahmadinejad's Iran in which he has threatened to wipe "Israel off the map." M.A.D. does not apply to psychotic leaders or nihilistic ideologies.

Relatedly, conventional warfare between nuclear capable nations may also be a recipe for mutually assured destruction -- particularly if it's total war. Again, presuming the presence of rational actors, should one side start to lose the war (and consequently lose hope), they could threaten to annihilate the enemy with nuclear force, an action that would most assuredly be reciprocated. Thus, because conventional war would either result in stalemate or the complete destruction of both sides, such a conflict would never be entered into. This might be an explanation as to why India and Pakistan have not dared to go to war with one another.

This said, given the need for military “options” in the nuclear age, the Pentagon has recently provisioned for both nuclear and conventional war against enemy states. These are quick-strike campaigns that have been under development since 2002 and are meant for crisis situations in which the enemy would be engaged and debilitated in short order. These plans, which are named JFCCSGS and CONPLAN 8022, are the modern day equivalent to Nazi Germany's Blitzkrieg of World War II -- but with much more sophisticated technology and tactics behind it.

JFCCSGS, which stands for "Joint Functional Component Command Space and Global Strike," is the establishment of a space and earth attack command unit for the purpose of engaging in pre-emptive nuclear strikes. Seriously. It has the mandate to oversee the launching of a nuclear attack and the pre-emptive use of nuclear warheads not only against "rogue states" but also against China and Russia. As of December 2005, JFCCSGS is said to be in "an advance state of readiness." One month earlier, the unit successfully completed an exercise called "Global Lightning," which was meant to mirror an attack on North Korea. It is assumed that JFCCSGS exists almost exclusively to deal with potential problems raised by both North Korea and Iran.

CONPLAN 8022, which is short for "Concept Plan 8022," is different from other war plans in that it posits a small-scale operation and no (or minimal) "boots on the ground." CONPLAN would not require a focus on conventional forces such as air, ground and sea. Rather, it provisions for two different scenarios: 1) a response to a specific and imminent nuclear threat, and 2) a quick-reaction, highly choreographed strike combining pinpoint bombing with electronic warfare and cyberattacks to disable an enemy's response (I'm not sure what kind of electronic infrastructure N. Korea and Iran have, but I would have to think it minimal), with commandos operating deep in enemy territory, perhaps even to take possession of the nuclear device or WMD. Also in its arsenal are "clandestinely enabled effects," which are "non-kinetic" ways of disabling the workings of modern society (I’m sure you can use your imagination to figure out what some of these ‘effects’ might be).

CONPLAN can be instigated by presidential order; it is a "global strike" war plan that is meant to provide the president with options in the case of an imminent WMD threat. Military thinkers began working on the plan back in 2002 and were finished in November 2003. General Richard B. Myers signed the Global Strike "Alert Order" on June 30, 2004, putting the armed forces on notice that they needed to be ready to carry out a strike on the president's order.

These are frightening provisions, particularly in their call for the use of nuclear weapons (even if some of them are low yield). And these "options" have been made all the more plausible and threatening by virtue of the collapsing international effort to curtail the spread of nuclear arms. The North Korean example (or was that Pakistan?) should act as yet another wake-up call for the global community to enact and enforce stricter treaties that limit the spread of nuclear weapons. The idea of national sovereignty and the "right" to produce nuclear weapons is as invalid as it is dangerous. Given the sorry state of some countries, whether it is the result of an erratic leader, a fanatical ideology, or an insecure political infrastructure, the number of counties in the nuclear club must remain at minimal levels.

At the same time, there also needs to be a concerted collective effort to foster a more influential United Nations and a stronger pan-international security force to help countries defend themselves. This one is more difficult, particularly when you have nation-state pariahs like Iran and North Korea who feel persecuted by the international community. Ultimately, however, a centralized and democratized world federalism would go a long way to curtailing some of the geopolitical instability we are currently experiencing in this highly multi-polar world.

Excellent post. I share your concern. We're entering a period that probably is far more dangerous than the balance of terror of "mutual assurred destruction" deterrence of the cold war. A big reason is that, judging from things like the reaction to the TV show Jericho, more and more folks seem to think nuclear war is survivable with just a little grit and determination -- just another kind of war. It's a huge collective failure of memory.

Some thoughts about an increasingly oblivious world poised on the edge of the abyss: Dr. Strangelove, please keep an eye on your toys. The grandchildren are getting forgetful.