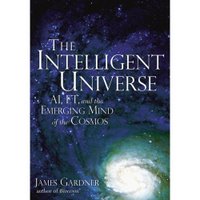 James Gardner, author of Biocosm: The New Scientific Theory of Evolution: Intelligent Life Is the Architect of the Universe, has recently published his latest book, The Intelligent Universe: AI, ET, and the Emerging Mind of the Cosmos. Gardner is also the author of the essay, "The Physical Constants as Biosignature: An anthropic retrodiction of the Selfish Biocosm Hypothesis." I've written about Gardner and the topic of cosmological eschatology in the past.

What is the ultimate destiny of our universe? That is the striking question addressed by James Gardner in The Intelligent Universe.

The cosmos might end in fire—a cataclysmic Big Crunch in which galaxies, planets, and life forms are consumed in a raging inferno as the universe contracts in a kind of Big Bang in reverse.

Or the universe might end in ice—a ceaseless expansion of the fabric of space-time in which matter and energy are eternally diluted and cooled; stars wither and die, , and the cosmos simply fades into quiet and endless oblivion.

In The Intelligent Universe, James Gardner envisions a third dramatic alternative—a final state of the cosmos in which a highly evolved form of group intelligence engineers a cosmic renewal, the birth of a new universe.

Gardner's vision is that life and intelligence are at the very heart of the elegant machinery of the universe. It is a viewpoint that has won outspoken praise from an array of leading scientists, including Sir Martin Rees, Britain’s Astronomer Royal, and Templeton Prize winner Paul Davies.

The Intelligent Universe is both a look into the past and a road map for the future of the universe. It explores the mysteries of the universe and of consciousness, and provides a frank and fascinating look at where our minds are taking us.

a final state of the cosmos in which a highly evolved form of group intelligence engineers a cosmic renewal, the birth of a new universe.

Or a group of not-so-evolved "keystone cops" that don't know what they're really doing when they simulate the conditions for the big bang in the Large Hadron Collider, next year.

For example, if tension between the vacuum and ordinary matter increases as the universe expands, then you can get a "needle/balloon effect" from such a simulation... IF they don't know what they're talking about, and the universe is actually finite instead of infinite, as is ASSUMED, but never supported by any logical proof.

The End of Particle Theory... or worse!

If the worst case scenario plays out, and the LHC discovers nothing, then that is the end of particle physics as we know it. And that includes string theory. They may think they are immune, but they are not - they will fall due to lack of funding with the rest of us.
-Joanne Hewett

WOW!... that would suggest that you don't really have the firs clue what you're about to do and all passengers should tuck their heads between their knees in case they have to kiss their asses goodbye!