I have this bizarre fascination with parapsychology for reasons that I can't quite put my finger on. Perhaps it's my wish that there were such things as telepathy, remote viewing and psychokinesis. Or perhaps it's my interest in seeing these sorts of things arise through the application of advanced technology, like techlepathy.

The latest thing to catch my attention in the wild and wacky world of parapsychology is the Global Consciousness Project. As with most of these things, the proof lies in the pudding and one has to seriously question the integrity of the data, how the data was extracted and how it was interpreted.

Basically, the Global Consciousness Project, also referred to as the EGG Project, is a test into the theory that human consciousness may create or otherwise influence objective reality by means undetectable by current scientific sensors. It's an academic study based in Princeton that attempts to measure the intensity of shared conscious reactions to global events.

The GCP website offers this summation of the project:

The Global Consciousness Project (GCP) is an international effort involving researchers from several institutions and countries, designed to explore whether the construct of interconnected consciousness can be scientifically validated through objective measurement. The project builds on excellent experiments conducted over the past 35 years at a number of laboratories, demonstrating that human consciousness interacts with random event generators (REGs), apparently "causing" them to produce non-random patterns. A description of the technical implementation is given under procedures.

The experimental results clearly show that a broader examination of this phenomenon is warranted. In recent work, prior to the Global Consciousness Project, an array of REG devices in Europe and the US showed non-random activity during widely shared experiences of deeply engaging events. For example, the funeral ceremonies for Princess Diana, and the international Winter Olympics in Nagano, Japan, created shared emotions and a coherence of consciousness that appeared to be correlated with structure in the otherwise random data. In the fully developed project, a world-spanning array of labile REG detectors is connected to computers running software to collect data and send it to a central server via the Internet. This network is designed to document and display any subtle, but direct effects of our collective consciousness reacting to global events. The research hypothesis predicts the appearance of coherence and structure in the globally distributed data collected during major events that engage the world population.

Princeton has what's called the Princeton Engineering Anomalies Research Lab (PEAR) which makes it its business to track and document, uh, anomalies (actually, my world is a much better place now that I know such a research lab exists). Among other things, PEAR sets up and monitors random event generators (REGs) and looks for non-randomness. To help the GCP crew gather their data, PEAR maintains a network of REGs around the world that send data continuously over the Internet to a server in Princeton.

As an aside, why consciousness should affect random number generators is beyond me -- perhaps someone versed in quantum mechanics or quantum consciousness studies (a al Stuart Hameroff) can enlighten me. I say quantum because I cannot think for the life of me of any other mechanism that could possibly account for this -- assuming this data is actually being read and interpreted properly. Anyway, the assumption of the GCP researchers is that human intention can reduce natural entropy and create greater coherence within a random series of events. 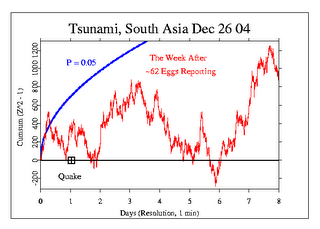 For example, the GCP claims that the 9/11 attacks resulted in some of the most serious data events on the REG's. A non-random spike, which apparently has a 1 in 200 chance of occurring at any given time, occurred several hours before the attacks. Some have speculated that a sort of precognition is happening, citing similar effects shortly before other events that have global reach (like the Indian Ocean tsunami of 2004).

Interestingly, this brings to mind the often erratic behaviour of some animals prior to natural disasters.

That said, a 1 in 200 chance (which is hardly astronomical at 0.5%), along with the seeming arbitrariness of when the data is deemed to be meaningful, seriously puts these claims into question. Other valid criticisms of the GCP include the problem of having no objective criterion for determining whether an event is significant, and that there is no correlation between degree of significance and type or magnitude of fluctuations observed.

Regardless, I have no objection to this lab or any other parapsychology department to continue extracting "data" in this way. I don't think this crew, which includes cognitive psychologist Roger D. Nelson, is making any claims as to causation -- they're simply pulling the data together to see if there's something worth analyzing.

Sure, this may be quackery of the highest order, but the scientific method is tied directly into data collection and analysis, followed by the positing and elimination or affirmation of hypotheses. To dismiss and ban this type of work would violate the spirit of scientific inquiry.
Posted by George at 9/14/2006