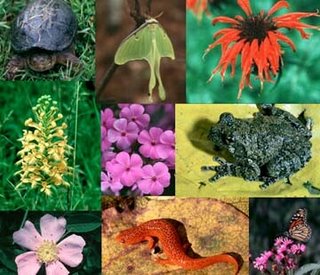 Ecologists like to talk about biodiversity, and rightfully so. It is frequently used as a metric to determine the health of an ecosystem. Biodiversity is often measured not just in ecosystems, but among species and at the genetic level.

At first blush, it would seem that evolution is capable of providing an infinite array of biological possibilities.

While it certainly appears that there is no limit to the kinds of species that can viably exist in nature, the physcial and energy constraints of the universe provide an outer limit to diversity. Moreover, because evolution is an autonomous process, and because organisms do not live in a vacuum, ecosystems become the arbiter of phenotypic diversity as genomes settle around equilibrium points.

In other words, there is a finite number of phentoypes that can spontaneously emerge within autonomous ecosystems.

Of species and phenotypes

The practice of categorizing organisms into species, while extremely helpful for certain applications, does little to describe the ecological niche in which an organism has settled. And as best as I can tell other scientific classifications fail this test as well (i.e. kingdom, division, phylum, subphylum, class, subclass, infraclass, superorder, order, suborder, superfamily, family).

What would be helpful would be a set of sub-classifications that describe a species's archetypal ‘role’ or ‘function’ within an ecosystem and its ‘being’ at a particular point in its evolution (such as an attained fitness peak).

Zoologists and ecologists already categorize animals in this way. They talk about such things as pack-predators, parasites and symbionts. Those are the types of descriptions that give a good overview of what an animal is all about, where it is situated within its environment, and what relationship it has with other organisms that occupy the same ecospace. This terminology, however, could probably use some fine tuning and increased formalization.

I’d be willing to bet that there is a finite number of these sub-classifications; the space of all viable phenotypes is drastically smaller than the space of all possible species (which is arguably near infinite). It is for this reason that archetypal phenotypic classifications would be more beneficial and descriptive from the perspective of scientific classifications. There’s even the potential for astrobiologists to conjecture about possible off-world phenotypes given the potential for a finite set of habitable ecosystem types. 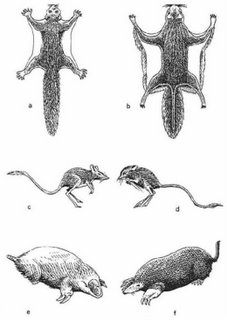 What I’m really speaking of is a more formal language to describe the phenomenon of parallel and convergent evolution. It would also be a language of categorization that would recognize physical and ecological determinism in biology. It is well known in evolutionary biology that independent strands of DNA will drive toward common fitness peaks and acquire similar morphologies. It's been said that while mutation is random, selection is not. Because physical environments determine selection there is a limit to just how diverse organisms can be in their characteristics. And then there's the entire issue of ecosystems and the attainment of equillibrium points and how that impacts on selection.

Such a meta analysis of organisms and ecosystems would require an interdisciplinary approach that would involve ecology, macroecology (top down studies and comparative analyses of ecologies), evolutionary biology, macro evolutionary biology (the study of speciation), zoology, among others. This would essentially be a macroscale project at an extremely high level of analysis.

What do I mean by common or archetypal phenotypes? 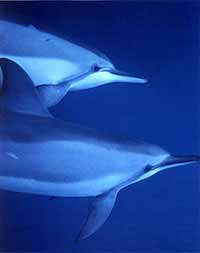 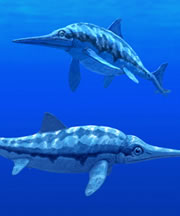 As an example, millions of years ago there lived a sea creature called the ichthyosaur. In its day it occupied the same ecological niche as the dolphin does today. In fact, these organisms are practically identical despite the fact that one was a reptile and one a mammal. These unrelated organisms were shaped by the same environmental pressures, the same laws of physics and hydrodynamics, and likely fed upon the same type of prey. For all intents and purposes, they are the same creature. More importantly, they occupied the same ecological niche and arrived there due to virtually identical environmental pressures. Thus, what I’m arguing is that dolphins and ichthyosaurs require a common classification. 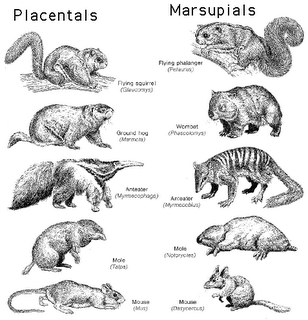 One of the most spectacular examples of parallel evolution is provided by the two main branches of the mammals, the placentals and marsupials, which have followed independent evolutionary pathways following the break-up of land-masses such as Gondwanaland roughly 100 million years ago. In South America, marsupials and placentals shared the ecosystem (prior to the Great American Interchange); in Australia, marsupials prevailed; and in the Old World the placentals won out. However, in all these localities mammals were small and filled only limited places in the ecosystem until the mass extinction of dinosaurs forty million years later. At this time, mammals on all three landmasses began to take on a much wider variety of forms and roles. While some forms were unique to each environment, surprisingly similar animals have often emerged in two or three of the separated continents. Examples of these include the litopterns and horses, whose legs are difficult to distinguish; the European sabre-tooth tiger (Smilodon) and the South American marsupial sabre-tooth (Thylacosmilus); the Tasmanian wolf and the European wolf; likewise marsupial and placental moles, flying squirrels, and (arguably) mice.

Only so many viable ecosystem types

Just to clarify, individual morphological characteristics, like the eye, is not what's being discussed here. Nor is a similar morphology sufficient grounds for mutual classification. Some animals, namely the mimics, copy superficial physical characteristics to reap the benefits another organism’s successful adaptation. These copycats would not fall within the same archetypal classification as the creature it is mimicking. Rather, I’m interested in discussing independent but common morphologies and their shared role in the ecosystem (namely those ecosystems that have attained a relatively stable equilibrium point).

Now all I need is a word to describe this. Macrozoology? Macrotaxonomy? Or is it just a heightened version of studies into parallel and convergent evolution? I wouldn't mind hearing some of the thoughts of my readers on this and this post in general.
Posted by George at 9/15/2006

Ha, it occurs to me now as I reflect on this post that what I'm describing is not so much a universal phenotype so much as a set of universal ecosystem niches. Morphological diversity can vary for organisms with the same role within an ecological niche, but it won't vary by a significant degree.

"I'm describing universal phenotype so much as a set of universal ecosystem niches."

Yes, they will vary greatly within niches! A 100m-tall monster living in lava is different than bacteria living in lava, even they might not have the same "role" (how do you define this?)

In terms of niche characterization, we can describe this easily based on normal physics measures - density, temperature, chemicals, homogeneity, etc.

In terms of "niche role", what do you mean? Predator, prey, etc?

"Metazoology" is a decent name.

Universal phenotypes - bipedal, quadripedal, bigger than a breadbox, spikey, smooth - what words are you looking for here.

There is an interesting idea you have here in this post but I don't think it's presented concisely/straightforwardly/bluntly enough. What are you trying for, can you describe it in a single paragraph?

It sounds like what you want is a full characterization of what I would call the "ecosome," the set of all ecosystems (my coinage follows current biological naming conventions: genome, proteome, transcriptome, etc). The problem is that there's no standard resolution at which to operate. You could be as general as "parasite," "predator," and "prey," or as specific as "things that bark as a mode of communication." The research space is ill defined, but I guess you can take on the task of formalizing it.

Also, if you analyze things without knowledge of their phylogenetic background, you miss something extremely important. A tazmanian tiger may have evolved to fill a similar niche to canines, but it was a marsupial and was actually less similar to canines than humans are.

Thanks for the comments, guys. I find that "thinking out loud" in this manner forces me to articulate my often non-sensical thoughts. In this case, I think it may be back to the drawing board.

That said, I'm going to continue to think about the potential for macroecology and what Martin has dubbed the ecosome. I still believe that environmental determinism is in effect in natural selection and that there are definite patterns and limitations to the diversity of life.

Oh, regarding the ichthyosaurs and dolphins: the question I'm posing is whether or not they occupy the same ecological niche.