The Futurist: the future of human-machine intelligence 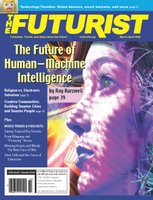 The March/April 2006 issue of The Futurist looks very interesting (some of these articles can be found at KurzweilAI, or you can order copies):

Cover Story:
Reinventing Humanity: The Future of Machine–Human Intelligence
By Ray Kurzweil
Author and inventor Ray Kurzweil sees a radical evolution of the human species in the next 40 years.

Translation by Machine: A Bridge Across the Multicultural Gap
By David Belluomini
Growing diversity is a challenge in many U.S. neighborhoods. Technologies for overcoming language barriers offer hope for facilitating better communication.

Scenarios:
At Home with Ambient Intelligence
By Patrick Tucker
In the future, your environment will respond to your needs and moods before you even know what they are.

Articles:
Building Creative Communities: The Role of Art and Culture
By John M. Eger
The leading authority on information technology argues that cities must nurture the creative potential and community engagement of their citizens.

Cyberimmortality: Science, Religion, and the Battle to Save Our Souls
By William Sims Bainbridge
Research enabling you one day to archive and regenerate your memory, personality, and consciousness—giving you cyberimmortality—may meet resistance from religious groups arguing that the soul is a spirit, not a system.

A Timeline for Technology: To the Year 2030 and Beyond
By Ian Pearson and Ian Neild
What's ahead in technology, and what will it mean. This new timeline offers a glimpse of likely developments—and of how they may change our lives.