Tatooine-Like Planets May Be More Common Than We Thought 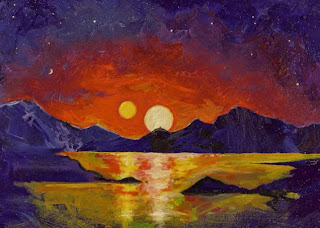 For decades, astronomers have assumed that Earth-like planets cannot form around binary stars on account of wacky gravitational effects. Which, for Star Wars fans, was a total downer. But a new study suggests that not only is the formation of Tatooine-like planets very much possible, they may actually be quite common.
Unlike the accretion disk surrounding a young solitary star, the planet-forming environment around a binary system is subject to seriously disruptive gravitational ebbs and flows. In turn, many astronomers believed that the formation of rocky planets around binary stars is either very difficult or outright impossible. A new study by Ben Bromley from the University of Utah and Scott Kenyon of the Smithsonian Astrophysical Observatory now suggests otherwise.
Read the rest of the post at io9.
Posted by George at 4/02/2015