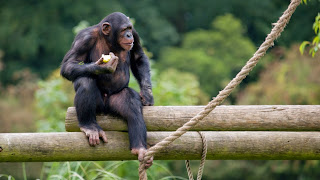 For the first time in U.S. history, a supreme court has granted a writ of habeas corpus on behalf of two lab chimpanzees, effectively recognizing them as legal persons. While the future of the chimps has not yet been decided, it's a huge step forward in establishing personhood status for highly sapient animals.
Yesterday, Manhattan Supreme Court Justice Barbara Jaffe issued an order to show cause and writ of habeas corpus on behalf of two chimpanzees, Hercules and Leo, who are being used for biomedical experiments at Stony Brook University on Long Island, New York. A writ of habeas corpus requires a detained person to be brought before a judge or court to secure their release unless it can be shown that they're being held for lawful reasons. Stony Brook University, who are being represented by the Attorney General of New York, will now have to present their case to the court on May 6th.
In New York, only a legal person can have an order to show cause and have a writ of habeas corpus issued on their behalf. The judge, by virtue of doing so, implicitly decided that the chimps are legal persons for the purpose of habeas corpus.
Read the rest of the article at io9.
Posted by George at 4/21/2015