It was the biggest Burning Man ever, and this is what I saw there 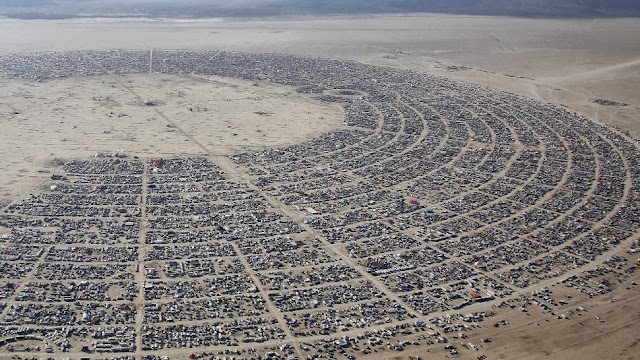 In early September I returned to the Toronto area after attending my second Burning Man — an annual countercultural festival set in Nevada's remote Black Rock Desert. Here’s the story of my remarkable trip — in photos.

Top image: Black Rock City 2013. This was the largest version of the city to date, with a reported population of 68,000 people. Image: Reuters/Jim Urquhart.

Two years ago when I attended my first burn, I was left with the feeling that I wanted to share this incredible experience with my kids. So this time around I was joined by my 16-year-old son, Lucas.

SEXPAN
After months of planning, purchasing supplies, and stocking up on costumes, we left for San Francisco on Friday August 23. In preparation, Lucas, colored his hair a brilliant aqua blue.

We got our first taste of Burning Man, so to speak, when our plane flew over the wildfires raging in Yosemite Park — the third largest wildfire in California's history. The billowing clouds that emerged above the park were unlike anything I had ever seen before. And unbeknownst to me, the smoke would later influence our experience as we traveled through smokey Reno, Nevada.

After hanging out in San Francisco for a day and stocking up on camping supplies, we hit the road in anticipation of a long and arduous pilgrimage to the otherworldlyBlack Rock City. We made several stops along the way, including a Target where I purchased a $100 bike for my son. We also stocked up on lots of water; everyone who attends Burning Man needs to supply their own — there's no running water out there. The rule of thumb: 2 gallons of water per person per day.

Vehicles bound for Black Rock City became a frequent sight as we drew nearer to the gates.

The smoke from the Yosemite fires created a haze that covered Reno and extended north into the Black Rock Desert. Some Burners speculated that the smoke resulted in the mild nighttime temperatures experienced at this year's event. Normally, it gets bitter cold at night, but not this time around.

We had a ridiculously easy entrance into the city. We arrived at the gates on Sunday August 25 at 5:45 PM and were inside the city by 7:30 PM. Burners who arrived only a few hours after us had to endure as much as a 12 hour wait to get processed. The lineup of cars extended well past Gerlach, a mining town located a few miles away. Part of the problem was that, quite inexplicably, the population of Black Rock City exceeded limits early on (which was weird given a finite number of tickets sold).
In anticipation of the entry crush, Burning Man organizers introduced a new shuttle service to bus attendees in.

D
This is what they make you do at the entry gates when you're a virgin to Burning Man.

Black Rock City, which this year boasted a population as much as 68,000, is temporarily constructed atop a dried-up lakebed called a playa. It's incredibly flat and devoid of any vegetation, though I did see a grasshopper and a beetle-like insect. The city itself takes its shape as visitors park their cars, RVs, and vans, and as they set up their various living arrangements, like tents and yurts.
Many art displays can be found within the city's inner circle, called the Esplanade. This year's event featured a record number of individual displays.

Due to the vast distances, bikes are an indispensable feature of the Burning Man experience. Personally, I minimized my bicycle use in an effort to increase social interaction and engagement. And indeed, by mid-week, Lucas picked up on this and largely ditched his bike in favor of walking and striking up conversations with his fellow Burners. So, for example, we would randomly walk in on camps and make new friends. We even worked a shift at the Black Rock City post office.

This year's temple was spectacular, a pyramid-like structure that served as a one-week shrine prior to its fiery destruction on the final day. It's an incredibly solemn place — a kind of non-denominational grounding spot where people come to mourn, meditate, pray, or do whatever it takes to reconnect with their spiritual side. By the end of the week the temple's walls are covered in highly personal hand-written inscriptions.
Regrettably, organizers burned the temple down an hour earlier than usual this year for fear of an incoming storm (that never came). As a result, many people missed the climactic burn. This years exodus (the time it takes to leave the Burning Man grounds) averaged about four to six hours.

The Truth Is Beauty sculpture was one of my favorite things at Burning Man this year. Created by artist Marco Cochrane, the piece asks its audience to consider: "What would the world be like if women were safe?"
And what would Burning Man be without the art cars?

Behold the latest edition to the playa: El Pulpo Mecanico, the result of a successful Kickstarter campaign.

Wait, what!? The Doctor was at Burning Man!!

But thankfully I never did run into a Tusken Raider.

Attending a talk at TEDxBlackRockCity.

A personal highlight for me was watching the sunrise on the Dusty Rhino art car while electronic artist Tycho performed live.

The camp we stayed at this year was The Future (formerly known as Future Camp). We set up our tents under a shade structure to shield against the intense heat. But even with this layer of protection it's still very unpleasant inside a tent during the day.

It's not all fun and games at Burning Man. When you're with a camp, there's also work to be done. This is a typical dish washing station, with washers working from left to right. At bottom left you can see where we stored our grey water.

I was pretty sick of these things by the end of the week. Port-a-potties were (apparently) cleaned twice a day, but were often in fairly rough shape. Burning Man is not for everyone.

The "infrastructure" of Black Rock City is comprised of cars, RVs, tents, yurts, whatever.
At night, things either glow, sparkle, blink — or are set completely aflame.

On the Friday, a wooden-replica of the Mir Space Station housed in a pyramid-like structure was burned to the ground. Its collapse was particularly dramatic.

The Man just a few minutes before its destruction. The fire was preceded by what is considered the world's largest fireworks display. And after watching all 15 minutes of it, it's a claim that's hard to argue.

The Man burns. This was probably the most spectacular thing I have ever seen. (Photo credit:Seatlepi)

An unspeakably beautiful sunrise on the last day. Unreal.

Unless indicated otherwise, all images are my own, with a hat-tip to Ross.