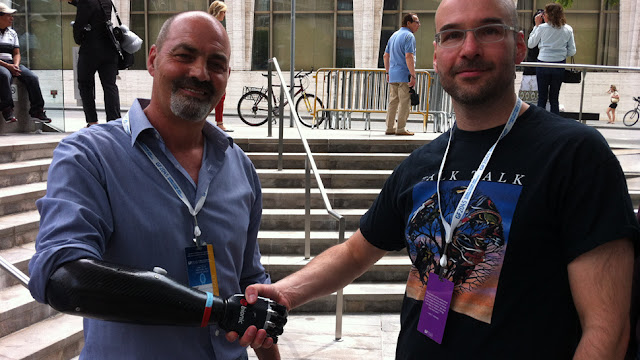 Meet Nigel Ackland, the recipient of the Bebionic 3 artificial hand — the world’s most advanced cybernetic limb. He was just one of over 30 remarkable scientists, technologists, and futurists who spoke at the recently concluded Global Future 2045 Congress held in New York.
I recently returned from GF2045 after an intense and jam-packed weekend in NYC. The congress, which was organized by the 32-year-old Russian entrepreneur and futurist Dmitry Itskov, was an extension of his 2045 Initiative — an attempt to upload a fully conscious mind to an avatar by mid-century.
To explore and promote this possibility, Itskov assembled a diverse and eclectic set of thinkers that included futurist Ray Kurzweil, biologist George Church, mind theorist Marvin Minsky (via pre-recorded video as he is currently ill), optogenetics neuroengineer Ed Boyden, X-Prize founder Peter Diamandis, and many, many others.

But the big hit of the conference had to be Nigel Ackland, a 53-year-old former precious metals worker from Royston, Cambridgeshire, who lost his right hand when it became caught in an industrial blending machine at a smelting plant in 2006. The severity of his injury left him with a flared stump and difficulty finding a suitable artificial limb. Initially, the best that doctors could do for him was a replacement hook.
But in May of last year, Leeds-based prosthetics company RSLSteeper asked Ackland if he would trial its latest artificial hand — the most high-tech available in the world.
Speaking on stage for the very first time, Ackland demo’d the sleek, black device to a rapt audience. He operated the limb by sending the same brain signals he used to move his original arm. Sensors on the artificial limb can pick up these signals and trigger one of 14 pre-programmed movements, including grips, wrist movements — and even individual finger movements (like a forefinger pincer motion).
The crowd gasped when he rotated the wrist a full 360 degrees.
After his talk, and for the duration of the congress, Ackland was swarmed by attendees. At one point there was literally a line-up of people waiting to have their picture taken with him. Cyborgs, it would appear, have very quickly become our heros.
When I finally managed to meet Ackland, I asked him what he thought about all the attention.
“I absolutely love it,” he told me. “And it certainly beats the alterative — being completely ignored.”
He was referring to the previous six years — a challenging period of time before the artificial hand when very few people approached him on account of his hook. The artificial hand, it would seem, has certainly changed his fortunes.
“Having a bionic hand makes me feel like a human again,” he told me.
This article originally appeared at io9.
Posted by George at 6/27/2013