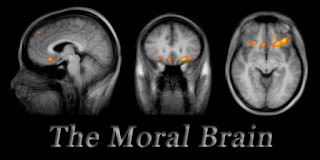 I recently returned from New York where I attended the NYU 2012 Bioethics Conference: The Moral Brain organized by the NYU Center for Bioethics in collaboration with the Duke Kenan Institute for Ethics and the Institute for Ethics and Emerging Technologies. The conference took a multi-disciplinal approach to the issue of morality as it pertains to cognitive function and the question of whether or not our moral sense could ever be enhanced at the biological level. The event brought together an impressive number of key thinkers and academic leaders, including neuroscientists, bioethicists, and philosophers. In fact, this conference featured one of the strongest itinerary of speakers I have seen in quite some time (download program here (pdf)).

The first half of the conference was dedicated to the neuroscientific aspect, while the back-half focused on bioethics and the question of modification and enhancement. I have to admit, I felt a bit out of my league during the first portion as most of the talks delved into hardcore neuroscience. As a bioethicist, I had to quickly adjust to keep up with all the talk of OFC's (orbitofrontal cortex) and vmPFC's (ventromedial prefrontal cortex) — but surprisingly, I started to get a hang of it after a while. And I have to admit, it was fascinating to take part in this conversation and see how moral sentiment is so indelibly tied into brain function.

One thing I noticed, however, is that neuroscientists tend to get a little too excited about fMRI's (functional magnetic resonance imaging). A typical presentation would showcase the work of a neuroscientist in which they came up with a challenge in moral decision making, put a person in an fMRI, make them think about that challenge, and see what parts of the brain light-up. Then, when the results are in, they put up their fancy screen-grabs and use their laser pointers to show us where the action is happening in the brain.

Look, I completely understand the importance of showing a cognitive basis for specific brain function. I get it. At the same time, however, there seemed to be a deficit of understanding from a cognitive or computational perspective. Absent from the conversation were potential insights from cognitive scientists.

Indeed, the emphasis was on data collection and articulating function, and less so on explanation. This was not necessarily a bad thing, as the former has to exist to fuel the latter. And encouragingly, philosophy is getting in on the action, namely through the burgeoning field of experimental philosophy. Old-school armchair philosophizing has largely been trumped by doing actual science. Now days, philosophers don't do their work until the data is in.

Is there a moral brain to be modified?

Interestingly, while arm-chair philosophy is on the way out, talk of Aristotelian virtue, Kantian deontology, and Millsian utilitarianism is still very much in vogue. The subsequent challenge for experimental philosophy and neuroscience is to (1) correlate those traditional frameworks with actual cognitive function (which may be impossible) and (2) decide which of these various ethical models provides the best roadmap for enhancement.

A general consensus that emerged from the conference was the idea that "morality" as a specific brain function could not be defined. As Walter Sinnott-Armstrong noted, we need to study the various components of morality separately as it's not a united, cohesive thing. No brain mechanism is both common to all moral judgments of wrongs and also distinctive of moral judgments of wrongs. Instead, morality, as broken down into different components, is more properly understood as a dyadic relationship. Interestingly, Sinnott-Armstrong's argument strengthened the case for consequentialism.

Moroever, there is also the exosomatic aspect of morality that needs to be considered. As Jonathan Haidt noted in his talk, "Moral systems are interlocking sets of values, virtues, practices, identities, institutions, technologies and evolved psychological mechanisms that work together to suppress or regulate self-interest and make cooperative societies possible." In other words, it's not all in the brain—and not by a long shot.

Other presenters made similar cases, including Wendell Wallach and John Shook. Wallach noted that we risk "pathologizing human nature" and that "there is no moral compass in the brain to be modified." And Shook, who took a normative perspective, noted that, "neuroethics will always be on its way to some newer ethics." For every moral person, he argued, there is a specific moral brain in action.

Which also made me realize that, aside from socio-cultural differences, gender differences must also account for differences in moralizing. It's no secret that testosterone impacts on male aggression and risk taking — which, if applied as an intervention, could be seen as moral (or virtue) unenhancement. I would have certainly liked to have seen more consideration given to gender differences in moral decision making and the various ways we could offset these traits among the two genders (an excellent application of postgenderism, to be sure).

Moreover, it was obvious to me (even before the conference) that moral enhancement cannot really be parsed out from cognitive enhancement. Because we're essentially talking about altering "normal" human brain functioning, and because our considerations are based on normative perceptions of moral or virtuous behavior, we're still essentially just talking about cognitive modifications. At best, we can isolate certain behaviours or tendencies, and seek to strengthen them through interventions.

For example, back in the days of the ancient Greeks, courage was considered to be a very important virtue. These days we don't consider it as such. I can only assume that, in future, we will similarly develop a different sense of virtuous behaviours compared to today's. Another example of blurred lines is the issue of strong executive control in decision making. It was generally agreed that, in order for an effective moral enhancement regime to work, strong will had to be an integral part of it. But is executive control a cognitive enhancement or moral enhancement? Both?

On a somewhat similar note, James Hughes's notion of "virtue enhancement" carried a lot of currency at Moral Brain, both in terms of its efficacy and its potential for controversy. By suppressing vice, argued Hughes, we can enhance virtue. It's moral enhancement that will make us more responsible. He contended that, while we should suppress immoral sentiments, we need to reinforce reasonable sentiments, including the retention of our capacity for "discriminating wisdom." That said, Hughes admitted that moral enhancement could cause risks to cognitive liberty through lack of privacy, overt control, ownership, norms, addiction, and inequality.

Indeed, the issue of unintended consequences and unintuitive side-effects came up quite regularly. Take oxytocin, for example — the poster molecule for moral enhancement. While it's well known that oxytocin can improve social bonding and interaction, it also has the paradoxical effect of increasing tribalistic tendencies on account of tighter lock-in of in-group thinking. In addition, heightening a virtuous trait doesn't necessarily imply a better person overall, and it could in fact cause other problems. As Paul Bloom showed, serial rapists have the highest self-esteem of any group. And Patrick Hopkins noted that hypermorality could cause crippling, debilitating effects on agency.

Aside from oxytocin, serotonin, propranolol and the implication of various areas of the brain required for moral action, there was very little said about how to go about moral enhancement. Virtually all interventions proposed were pharmacological in nature (hence the over-reliance of the ridiculous term "morality pill"), with no consideration given for genetic function, epigenetic factors, or ways we could actual physically alter the brain's mechanical function (e.g. deep brain stimulation or transcranial magnetic stimulation (See this study for example)). Part of the problem was the lack of imagination amongst the neuroscientists when it came to enhancement (most of whom, it's fair to say, had never even considered it prior to the conference—this is a new area of inquiry, after all). This is definitely one area that could stand some improvement in our thinking.

It's worth noting that the impermanence of neuropharmaceuticals is not necessarily a bad thing. Reversing undesirable brain-state may prove to be beneficial—a strategy that would work well within my designer psychologies model. The problem with neuropharma, however, is that is can often be too untargeted and blunt. As Molly Crocket noted, oxytocin and serotonin do a ton more than just instigate feelings of social bonding; we can't use them for this kind of specificity without incurring some side-effects.

And in terms of developing moral enhancement interventions, very little consideration was given to the role of supply and demand, and the role of Big Pharma in all this. One can make a strong case that demand does in fact exist, and as a result, pharmaceutical companies will eventually start to develop effective interventions. Take MDMA for example, which illicits heightened feelings of connectedness and empathy. That's a bona fide moral enhancement if I ever heard one — and considering the widespread use of MDMA, it's fair to say there's considerable demand. It could even be said that Aderall is a kind of virtue enhancement, in that it enables a person to focus on a specific task and get things done (i.e. what I was just referring to earlier: strong executive control in moral decision making).

Lastly, I would have liked to have seen moral enhancement discussed more in terms of its ends. Yes, there was some talk about it in the sense that it fulfilled the demands of certain ethical frameworks (virtue, deontological, and utilitarian/consequential), but not so much about the actual desired results for both individuals and society as a whole (Matthew Liao's talk notwithstanding). I was hoping to hear more about moral enhancement in the context of ensuring human flourishing, happiness, and well-being. But perhaps I'm being too picky; utilitarianism is broad enough a framework to make these sorts of assumptions. And in that sense this was all implied.

The Moral Brain conference was one of the most fascinating and provocative events I have ever attended. I certainly hope to see this discussion rekindled again in the near future.
Posted by George at 4/05/2012

Greg Egan's "Axiomatic" is a good story about engineering morality - a person who believes in non-violence takes an 'Axiomatic' nano-machine that momentarily rewires his brain so he can kill in revenge.