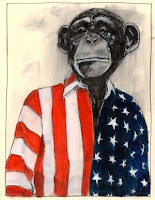 This is not as radical an idea as it may sound. The law is fully capable of making and unmaking “persons” in the strictly legal sense. For example, one Supreme Court case in 1894 (Lockwood, Ex Parte 154 U.S. 116) decided that it was up to the states “to determine whether the word ‘person’ as therein used [in the statute] is confined to males, and whether women are admitted to practice law in that commonwealth.” As atrocious as this ruling sounds, such a precedent continued well into the twentieth century and, in 1931, a Massachusetts judge ruled that women could be denied eligibility to jury status because the word “person” was a term that could be interpreted by the court.

Such a flexible interpretation of personhood was demonstrated most dramatically in 1886 when the Supreme Court granted personhood status to the first nonhuman. In this case it was a corporation and Southern Pacific Railroad (part of robber baron Leland Stanford’s empire) snuck in through a legal loophole to gain full personhood rights under the 14th Amendment. Such rights have now been extended to all corporations under the Citizens United ruling in 2010, which is what allowed Mitt Romney to confidently declare “corporations are people, my friends.”

But prior to 1886, dating back to the 1600s, corporations were viewed as “artificial persons,” a legal turn of phrase that offered certain rights to the companies but without the full rights of citizens. By using the wording of the 14th Amendment (intended to protect former slaves from a state government seeking to “deprive any person of life, liberty, or property, without due process of law”) it was ruled that corporations should enjoy the same status. As a result, between 1890 and 1920, out of all the 14th Amendment cases that came before the Supreme Court, 19 dealt with African-Americans while 288 dealt with corporations. With the legal stroke of a pen, artificial persons were granted all the protections of citizens.

But that would be unlikely to happen with whales, dolphins, or even great apes. A “nonhuman person” would have a definition similar to this earlier tradition of “artificial person,” one that grants limited rights that a government is obligated to protect. Furthermore, according to White, the term would only apply under very specific criteria for nonhumans that had self-awareness, complex social as well as emotional lives, and evidence of conscious awareness (so, for example, ants would never be considered persons under law). According to White, these criteria have been met in the case of dolphins and whales and our legal institutions should incorporate this evidence into American jurisprudence.

“One of the most important aspects of science is that scientific progress regularly raises important ethical questions,” said White. “As scientific research produces a more accurate picture of the universe, it often reveals ways that human attitudes and behavior may be out of synch with these new facts.”

Not sure I agree with the whole "artificial persons" concept. That's a half-assed approach to the matter that's both scientifically and politically unsatisfying. Either you're a person or you aren't. Corporations aren't persons. Cetaceans, great apes, and elephants most certainly are.
Posted by George at 3/16/2012

Thanks for bringing this issue to my attention. (I signed the Helsinki Declaration, thanks to you.)

I get the feeling like, maybe, the word "person" is just too old and sclerotic to do anything about. Maybe we'd be better off talking about the rights of sentient beings, rather than personhood. After all, try as I might to think otherwise, the word "person" to me means human being.

"I met a person once, named Toobie."

"Oh, that's a strange name. Was he a nice person?"

The natural response for most of us would be something like, "Huh? What's that? I thought we were talking about a person."

(The fact that the courts have long ago deemed corporations to be persons just tells me that the people calling the shots know which side their bread is buttered on.)

I've thought about this myself. My hope is that the language will change and that we'll become increasingly comfortable using the word "person" in the context you described.