My appearance on al-Jazeera's The Stream

I was a guest panelist yesterday on the al-Jazeera show, The Stream, talking about the promise and perils of transhumanism. I was joined by Robin Hanson of George Mason University and Ari Schulman of the New Atlantis. 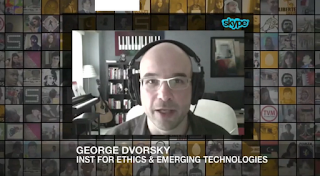 A format like this doesn't lend itself to more a nuanced and thoughtful discussion. There's only so much you can say in such a short amount of time, and within the constraints of sound-bites and targeted questions that tend towards sensationalism—and all while trying to keep the conversation as accessible as possible given such a wide and diverse audience. That said, the segment wasn't terrible and I was able to get my two cents in.
Posted by George at 3/29/2012

Ari claims near the ending that "functionalism has been philosophically dead for decades" Correct me if I'm wrong here, but isn't functionalism the mainstream view in cognitive science and philosophy of mind? Did he just completely make that up?

What I don't understand is how Ari thinks that taking drugs to change our moods and uploading ourselves onto the internet is 'radically different' from contemporary society.

Mood altering drugs are pervasive in both recreational and medical areas, and online functions such as facebook are striving, not secretively either, towards creating a virtual 'you'.