Guardian: Whales and dolphins 'should have legal rights' 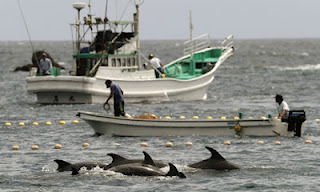 The Guardian is reporting on how a group of scientists and ethicists are making the case that sufficient evidence exists showing that whales and dolphins have the requisite intelligence, self-awareness and complex behaviour required for their rights to be enshrined in legislation:

Under the declaration of rights for cetaceans, a term that includes dolphins, whales and porpoises, the animals would be protected as "non-human persons" and have a legally enforceable right to life.

If incorporated into law, the declaration would bring legal force to bear on whale hunters, and marine parks, aquariums and other entertainment venues would be barred from keeping dolphins, whales or porpoises in captivity.

"We're saying the science has shown that individuality, consciousness and self-awareness are no longer unique human properties. That poses all kinds of challenges," said Tom White, director of the Centre for Ethics and Business at Loyola Marymount University in Los Angeles.

The group spoke at an annual meeting in Vancouver of the American Association for the Advancement of Science, to raise support for the declaration among scientists and the visiting public. They presented a 10-point declaration which set out a framework to protect cetaceans' "life, liberty and wellbeing." The declaration included their rights to freedom of movement and residence in their natural environment, and protection against "disruption of their cultures".

"The next step is taking the science and advocating for law in different places, from a regional point of view, from a national point of view, and eventually from a multinational and international view," said Chris Butler-Stroud of the Whale and Dolphin Conservation Society.

I like this, and it should be applied to not just marine mammals, but to the Great Apes and elephants as well.