Boosting the brains of animals 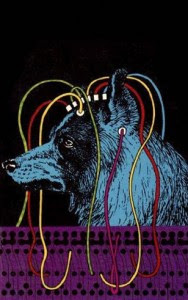 Avatar Polymorph has penned a neat article for H+ Magazine: The Ethics of Boosting Animals from Sentience to Self-Aware Consciousness.On the question of why:

What would be the arguments used in favour of such a radical realignment of life, with immortal (by choice) AIs, humans, hybrids and animals?

Secondarily, is it legitimate to use the Homo sapiens, mammalian template as a model for creating self-aware consciousness, culture and language?

In addressing these questions I take the brain as the seat of consciousness, and ignore any religious belief in a ‘soul’.

The first argument is reciprocity. Our example is important in terms of teaching the first AI or AIs while it or they are very briefly children.

If we expect a superintelligent AI to provide us with timely provision of the mechanisms of superintelligence, immortality and perhaps even the theory of everything of physics, then we must have lead by example, even if it is regarding something which we have only been able to support in principle, while lacking the immediate means to achieve it.

We may already possess what might be termed ‘superintelligence of the imagination’ – as a science fiction writer I have read much of this amazing breadth of thought. Amongst my earliest reading material was the famous 1944 novel by Olaf Stapledon, Sirius, concerning a dog whose intelligence was boosted. However, as we can all attest, outside of our imaginations we have limitations of the mundane.

The most everyday languages we can learn is about sixty, the most faces we can remember (an this is one of our key strengths) is about ten thousand. Only about thirty thousand logic trees go into each thought or action.

Even with advanced computational nanomachines embedded in our cerebrospinal fluid – according to TIME magazine, perhaps the equivalent of two hundred thousand human brains – we would still require further superintelligence to make a workable and permanent system quickly. In other words, if we expect to fix ourselves up within a century or less, we will need the assistance of Artificial Intelligence.

The second argument is empathy. While many of us may not feel we have much empathy with a leech, quite a few have empathy with social animals and pets, and indeed love for them.

The third argument is responsibility. If diversity and potential diversity is a positive feature of mortal life, one we now look for in our children as reflections of ourselves, then it should be reflected in immortal life.

Unlike Peter Singer, the popularizer of Animal Liberation, I believe that continuity is important. That a human baby is no different from a dog for some months is no grounds to ignore its future state. Similarly, with the potential abilities of the near future, we could regard a dog as a gestating ‘super-dog’.

The fourth argument is that it is fun to have more immortal beings around, with which we can interact.

The fifth argument is that it is fun to have more kids to raise.

The sixth argument is that under future conditions such as full automation, distributed production, individuated design, robotics, 3D printers and eventually nanotechnological assemblers (a much more advanced form of 3D printers, also known as nanofactories or molecular manufacturing) it will not cost us anything.

While I am not advocating megascale solar sytem engineering I also note that 1990s estimates of the maximum number of beings capable of being supported by all the material of the solar system as about 600 billion and certainly there is a lot of scope for all the current inhabitants of the planetary biosphere.

The seventh and final argument is that by making a current adult human the minimum requirement for a neural map for a birthed consciousness (along with the normal developmental period of adolescence) we have a reasonable sliding scale that involves no moral guilt for failed help.

The declining birthrate in Western nations suggests that point #5 is not the case.

As for why one would uplift I am reminded of two series of fiction. David Brin's Uplift universe, where the Progenitors found themselves alone in the universe and started the tradition of uplift to fill the void (on a smaller scale earth being in a cluster of ash worlds may have influenced our early grab at Patronhood). And the Orion's Arm project, where one of the theories as to why the Archailects bother keeping lower orders of life around is that on the rare occasion that some of them survive transcension it increases the diversity of the higher trophic levels.

Fiction has explored this issue quite a bit. Here is a list of ten novels where animals have been 'uplifted' for reference: 10 Stories About "Uplifted" Animals Who Gain Human Intelligence.
Birds, octopuses and cetaceans have all recently been found to be smarter than we initially thought, so these are very important questions.

While I greatly enjoy a good "what if?" scenario, to speculate about the morality of boosting animal intelligence is a mere distraction when we consider how terribly most domesticated animals are currently treated. This issue will only be of potential relevance once we've stopped exploiting animals by the tens of billions on CAFOs and other farming operations. We must first give other animals their negative liberties before we start arguing about what positive goods they are owed.