Check out Allen Buchanan's latest book, Better than Human: The Promise and Perils of Enhancing Ourselves: 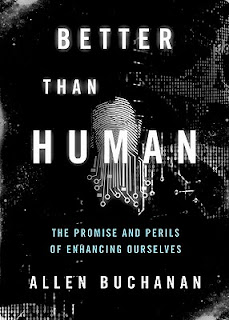 Is it right to use biomedical technologies to make us better than well or even perhaps better than human? Should we view our biology as fixed or should we try to improve on it? College students are already taking cognitive enhancement drugs. The U.S. army is already working to develop drugs and technologies to produce "super soldiers." Scientists already know how to use genetic engineering techniques to enhance the strength and memories of mice and the application of such technologies to humans is on the horizon.

Buchanan shows that the debate over enhancement has been distorted by false assumptions and misleading rhetoric. To think clearly about enhancement, we have to acknowledge that human nature is a mixed bag and that our species has many "design flaws." We should be open be open to the possibility of becoming better than human, while never underestimating the risks that our attempts to improve may back-fire.

And be sure to check out this feature interview of Buchanan in The Atlantic. Clip:

It's interesting you mentioned both Gattaca and Limitless because they're quite different. Gattaca is, in a way, representative of the majority of films that tackle these topics, which tend to be very dark. They tend to play on the anxieties people have about these technologies, and they tend to take a very negative view of their social consequences. Gattaca, for instance, paints a fairly grim picture, because it looks at the effects of genetic engineering on human beings simply in terms of its potential for creating a caste system, and I just think there's more to it than that. Limitless on the other hand, at least as I saw it, seemed to be much more positive and seemed to convey that people could have quite legitimate interests in cognitive enhancement technologies, and that the people who desire these technologies aren't just cranks or people who have inappropriate desires.