Should we develop a ‘Morality Pill’? 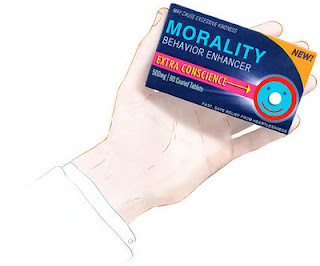 The debate over moral enhancement is starting to gain some traction. Peter Singer and Agata Sagan are the latest to chime in:

Undoubtedly, situational factors can make a huge difference, and perhaps moral beliefs do as well, but if humans are just different in their predispositions to act morally, we also need to know more about these differences. Only then will we gain a proper understanding of our moral behavior, including why it varies so much from person to person and whether there is anything we can do about it.

If continuing brain research does in fact show biochemical differences between the brains of those who help others and the brains of those who do not, could this lead to a “morality pill” — a drug that makes us more likely to help? Given the many other studies linking biochemical conditions to mood and behavior, and the proliferation of drugs to modify them that have followed, the idea is not far-fetched. If so, would people choose to take it? Could criminals be given the option, as an alternative to prison, of a drug-releasing implant that would make them less likely to harm others? Might governments begin screening people to discover those most likely to commit crimes? Those who are at much greater risk of committing a crime might be offered the morality pill; if they refused, they might be required to wear a tracking device that would show where they had been at any given time, so that they would know that if they did commit a crime, they would be detected.

Fifty years ago, Anthony Burgess wrote “A Clockwork Orange,” a futuristic novel about a vicious gang leader who undergoes a procedure that makes him incapable of violence. Stanley Kubrick’s 1971 movie version sparked a discussion in which many argued that we could never be justified in depriving someone of his free will, no matter how gruesome the violence that would thereby be prevented. No doubt any proposal to develop a morality pill would encounter the same objection.

But if our brain’s chemistry does affect our moral behavior, the question of whether that balance is set in a natural way or by medical intervention will make no difference in how freely we act. If there are already biochemical differences between us that can be used to predict how ethically we will act, then either such differences are compatible with free will, or they are evidence that at least as far as some of our ethical actions are concerned, none of us have ever had free will anyway. In any case, whether or not we have free will, we may soon face new choices about the ways in which we are willing to influence behavior for the better.

But if our brain’s chemistry does affect our moral behavior, the question of whether that balance is set in a natural way or by medical intervention will make no difference in how freely we act.

Neurotransmitters and neural pathways are certainly responsible for one's sense of morality but they're formed by nurture and cultural surroundings to a great extent. In an extreme example, this is why a man living in Eastern Europe will send charity care packages to Third World nations and a man living in rural Pakistan will behead his daughter for being raped and their acts will be seen as moral in their respective cultures.

You may certainly find a lot of minute differences between the brains of our hypothetical men, but you're not going to reverse them with a pill and override an entire lifetime of experience and education. We could chemically alter some brain functions that we believe are related to poor impulse control and addictive behaviors, which often lead to crime, but our actual success is bound to be very limited due to the complexity of the biology and sociology involved.

An easy call to make is psychopathy, which is already seen as a mental disability with a biological basis.

I had wondered about whether 'A Clockwork Orange' had caused such a controversy.
My opinion it's an easy call to make: of course you stop a violent person from continuing to cause harm. And that choice is more humane than execution or lifetime imprisonment. I bet many people think themselves enlightened taking the opposite position.