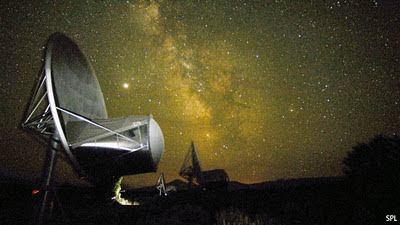 A recent article in the Economist alerted me to a recent paper by Thomas Hair and Andrew Hedman that profoundly reaffirms the conundrum that is the Fermi Paradox, an observational problem that is sometimes referred to as the Great Silence.

What's fascinating about the Hair and Hedman paper is that they are not cosmologists or astrobiologists, but rather mathematicians—and it is through the lens of number-cruching that they sought an answer to the question of how long it would take a civilization to colonize its local region given a specific set of parameters. And their findings are disturbing: No matter how they reworked the numbers, they came to the same conclusion: the Galaxy should be colonized by now:


To arrive at their conclusion Dr Hair and Mr Hedman assumed that outer space is dotted with solar systems, about five light years apart. They then asked how quickly a single civilisation armed with the requisite technology would spread its tentacles, depending on the degree of colonising zeal, expressed as the probability that intelligent beings decide to hop from one planet to the next in 1,000 years (500 years for the trip, at a modest one-tenth of the speed of light, and another 500 years to prepare for the next hop).

All these numbers are necessarily moot. If the vast majority of planets is not suitable, for instance, the average distance for a successful expedition might be much more than five light years. And advanced beings might not need five Earth centuries to get up to speed before they redeploy. However, Dr Hair and Mr Hedman can tweak their probabilities to reflect a range of possible conditions. Using what they believe to be conservative assumptions (as low as one chance in four of embarking on a colonising mission in 1,000 years), they calculated that any galactic empire would have spread outwards from its home planet at about 0.25% of the speed of light. The result is that after 50m years it would extend over 130,000 light years, with zealous colonisers moving in a relatively uniform cloud and more reticent ones protruding from a central blob. Since the Milky Way is estimated to be 100,000-120,000 light years across, outposts would be sprinkled throughout the galaxy, even if the home planet were, like Earth, located on the periphery.

Crucially, even in slow-expansion scenario, the protrusions eventually coalesce. After 250,000 years, which the model has so far had the time to simulate, the biggest gaps are no larger than 30 light years across. Dr Hair thinks they should grow no bigger as his virtual colonisation progresses. That is easily small enough for man's first sufficiently powerful radio transmissions (in the early 20th century) to have been detected and for a reply to have reached Earth (which has been actively listening out for such messages since the 1960s). And though 50m years may sound a lot, if intelligent life did evolve more than once, it could easily have done so billions of years before this happened on Earth. All this suggests, Dr Hair and Mr Hedman fear, that humans really do have the Milky Way to themselves. Either that or the neighbours are a particularly timid bunch.

So, the next time somebody smugly shrugs off the Fermi Pardox by suggesting that "it takes too long to colonize the Galaxy" or that "there hasn't been enough time," or that "the Galaxy is too big," tell them to shut-up and read this paper.

Note: It doesn't appear that the Hair and Hedman paper is online; I have contacted them and asked for a copy or a link; stay tuned.
Posted by George at 1/21/2012

It's kind of depressing to think that we are truly alone...

That is, if they want to spread across the entire galaxy. That's the main assumption here.

They may have other goals, and other needs to reach those goals, than populating every planet they can lay hands on.

To survive the death of a star (and its planets), it may be necessary to colonize several star systems, but no more than that.

E.g. 100 years from now, we might as well be living in virtual worlds (with almost no limits compared to the real world). In such a scenario it's quite possible that no long-range, wireless communications technology will be used anymore, but all via fiber-optic cables. Hence, we broadcasted only 100-200 years.

...Yeah, I'm not very persuaded by the virtual world ideas. They are certainly plausible but think about it, beings capable of generating such virtual worlds are surely capable of so much more and history shows that people will do things not necessarily because they have to but because they want to and are curious regarding the results.

Also, I don't perceive the end point of humanity to be a super digital singularity. I think that's boring. I have no interest in being merged electronically with everyone else.

What do those guys think the probability is of humans ever devoting money and resources to a 500-year plan to set up a colony around Proxima Centauri? Economics is as universal as physics, so that ought to give them their answer.

The way we're going now I think it most likely that most sapient species either die out before achieving space travel (from natural disaster or warfare) or decide that there's no profit in space and abandon it within a few decades of reaching their nearest satellite.

Agreed, though it's an option among many, not necessarily the best or most likely one.

Still, "the Galaxy should be colonized by now" sounds like a silly answer to the question why there is a 'Great Silence'. To say that, because they haven't visited us, or spread throughout the galaxy, we are alone, is a giant leap.

There are so many possibilities. Even Star Trek offered a solution :D, the Prime Directive.

The underlying assumption is that other sentient species would bother to expend the energy and effort to travel between star systems. Why not assume they've cultivated and their minds (by electrical and chemical means) such that exploration of the finite material universe seems rather dull compared with mapping and navigating an infinity of imaginal spaces and ways of being.

(1) Data is strongly indicating that colonization doesn't happen, because if the impetus were there the Galaxy would be colonized by now.
(2) As for the drive to colonize, it would in fact be the quest for resources, whether it be to extract energy from the stars or turn matter into computronium (perhaps out of some utilitarian agenda)
(3) We have to be careful about non-exclusivity. I can understand why 99.999% of advanced civs choose not to colonize, but all it would take is one.

I venture to suggest there are other reasons possible than the impetus to colonize a galaxy- for eventually that galaxy will shrink and become isolated anyway in the very long run.

I do not see our becoming some sort of virtual or digital singularity nor the necessary need for resources as a likely idea- nor that a civilization self-destructs at some point in its own achievement of technology.

I see the distinct possibility that civilizations, not just some disembodied sentience, find better ways to turn the vacuum into useful worlds and spaces before the need to explore what amounts to after all enough room in a galaxy to insure the rising of at least one world of life - maybe the uncanny idea of isolation as if we specially created really applies to the galaxy level- after all in Einstein's time it thought but the only island.

The PeSla at www.pesla.blogspot.com
who just happens to have brought up such speculation lately.

aterifThis is exciting. We are either alone as has being commented on or we need to start thinking about what or how life may be diiferent from ourselves and what other possiblities exist for communicating and travelling across the vast distances of space. We always seem to want to apply what we know as the only possiblities (SETI) which may be wrong in intergalatic terms.

Other than that, consider the Fermi Paradox from the other side ...

What if, at some point in our future, we're out exploring and settling the galaxy, and we come across a race like us?

What would YOU do as the Captain of the first human starship to enter such a system? What would "home office" (the UN?) recommend doing?

I don't know about you but if it were ME in the Captain's chair I'd quarantine the place as tight as I could until they grew up!

Which, I propose, is why we can't find any signs of intelligent life out among the stars.

Material-bodied scientists always project their prejudices about how life should exist, thinking that, because they are monkeys, then the gods must be monkeys too.

There are many many witnesses who have seen such beings, call them what they like, angels or demons or extraterrestrials..

Recall myths of ascended masters. Those who evolved into higher-dimensional, faster-than-light timeless realms.

Development of higher evolutionary abilities, usually the attainment of decades of spiritual discipline, or else a spontaneous gift, is now scientifically reproducible in the lab, with some tryptamine crystals which assist in interstellar hyperdimensional travel and communication with galactic neighbours.

The idea that matter is primary was a hypothesis which has been disproved by quantum science. Mind is primary, emerging from the zero-point energy field which is the home of consciousness. That's where the more highly evolved races reside.

Coming down into painful fleshy bodies is something the usually dislike, though there are those angelic being with compassion who manifest in mortal coils to benefit beings when the time is right. Like now, to guide us into a new era and a new evolution, where we recognise our place in the galactic network of consciousness.

Those are certainly some hopeful ideas.

Maybe it is true, in another sense: panspermia. We haven't solved the radiation problem of humans getting to Mars.

Also as far as we know other galaxies have been colonized (there are like 100 billion galaxies), it goes back to the idea why would anyone want to talk with us anyway? We're still very primitive.