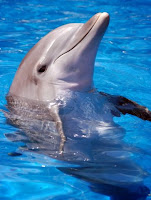 Scientists believe they have found an important key in understanding how dolphins communicate, what they're calling sono-pictoral communication:

Researchers in the United States and Great Britain have made a significant breakthrough in deciphering dolphin language in which a series of eight objects have been sonically identified by dolphins. Team leader, Jack Kassewitz of SpeakDolphin.com, ‘spoke’ to dolphins with the dolphin’s own sound picture words. Dolphins in two separate research centers understood the words, presenting convincing evidence that dolphins employ a universal “sono-pictorial” language of communication.


The team was able to teach the dolphins simple and complex sentences involving nouns and verbs, revealing that dolphins comprehend elements of human language, as well as having a complex visual language of their own. Kassewitz commented, “We are beginning to understand the visual aspects of their language, for example in the identification of eight dolphin visual sounds for nouns, recorded by hydrophone as the dolphins echolocated on a range of submersed plastic objects.”

The British member of the research team, John Stuart Reid, used a CymaScope instrument, a device that makes sound visible, to gain a better understanding of how dolphins see with sound. He imaged a series of the test objects as sono-pictorially created by one of the research dolphins.More.
Posted by George at 12/14/2011

the amazing things which are hiding in the universe , those to unearthed by science and its researchers .thanks for effort