NS: The dope on mental enhancement 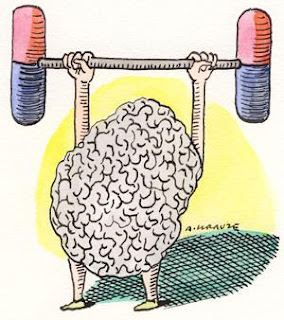 Susan Watts has penned an article for New Scientist in which she asks, "Yet another survey has revealed surprisingly large numbers of people using drugs to boost their mental powers. What should be done?" She writes:


So-called cognitive-enhancing drugs are usually prescribed to treat medical conditions, but they are also known for their ability to improve memory or focus. Many people buy them over the internet, which is risky because they don't know what they are getting. We also know next to nothing about their long-term effects on the brains of healthy people, particularly the young. But some scientists believe they could have a beneficial role to play in society, if properly regulated.

So who's taking what? The BBC's flagship current affairs show Newsnight and New Scientist ran an anonymous online questionnaire to find out. I also decided to try a cognitive enhancer for myself.

In the article, Watts goes on to describe her experience on modafinil:


On the second day I felt more focused and in control and thought I performed better in the tests. That was the day I had been given modafinil. Rowe summed up my performance: "What we've seen today is some very striking improvements… in memory and, for example, your planning abilities and on impulsivity."


It's not just students who claim to find the drug beneficial. Anders Sandberg of the Future of Humanity Institute at the University of Oxford talks openly about using cognitive-enhancing drugs. He is about to start a study in Germany to compare the effects of a range of cognitive enhancers, including two hormones – ghrelin, which promotes hunger, and oxytocin, which is associated with empathy – to test their powers at what he calls "moral enhancement".

"Once we have figured out how morality works as an emotional and mental system there might be ways of improving it," he told me.