Why Occupy Wall Street ain't no Arab Spring...and other musings 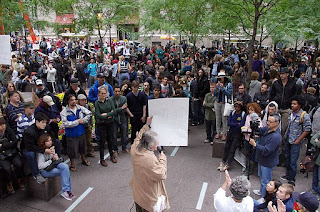 Like many people these days I've been thinking about the Occupy Wall Street movement. My mind's been spinning as I try to figure out what it's all about and what the movement might actually be capable of achieving. My thinking in these early days is equal parts hopefulness to outright cynicism. As I mentioned in a tweet earlier today, corporatism survived 60 years of communist onslaught; it should have no problem weathering this storm.

Or perhaps I'm overstating the whole thing. Maybe it's just about applying fixes to a system that's gone a bit haywire. And if that's the case, then great. I wish the protesters the best of luck.

But part of my concern is that, aside from some mild reforms that may come out of all this, the overriding and highly globalized capitalist system isn't going anywhere anytime soon. It's pretty entrenched and not easily rocked. The 99% are going to have to get comfortable with being a part of the disenfranchised majority for some time to come. This isn't like the situation in the Middle East; there's not going to be an Arab Spring on this side of the ocean any time soon.

Indeed, while there's no question that Occupy Wall Street was inspired by the Arab Spring, there's significant discrepancy in the underlying causes of these two social movements.

The situation in the West stands in stark contrast to recent events in the Middle East in which a number of countries were simply working to overthrow authoritarian regimes and get to democracy in the first place. The Middle East is currently struggling through puberty. It's a part of the world that's still coming to grips with modernity and socio-economic globalization. Religious fundamentalism threatens at every corner while Western influences complicate things by working to further their own interests in a region rich with oil.

And that's another aspect that differs from Occupy Wall Street. New York City protesters are railing against the very forces who helped the Arab Spring along. The success of the Arab Spring was and continues to be driven by the support of NATO and other Western benefactors. The West is diligently working to secure the region and prevent the onset of fundamentalist regimes—and to ensure easy access to oil. All the while claiming that it's working to instil democracy. It's no co-incidence that NATO suddenly cared about the situation in Libya while other oil-poor regions of Africa and the Middle East continued to burn. The whole charade is unabashedly obvious.

Without question, AdBusters—the Canadian activist group that kick-started Occupy Wall Street—took inspiration from the events in the Middle East, particularly the Tahir Square protests in Cairo. In copycat manner, AdBusters organized a peaceful occupation of Wall Street to protest the current U.S. political leadership and its failure to prevent or address the global financial crisis. The movement's auspices have expanded significantly from that starting point and now includes such things as taxing the rich, raising taxes on corporations, ending corporate welfare and personhood status, support for trade unionism, and protecting Medicare and Social Security. Occupy Wall Street, because of its decentralized nature, has become a Rorschach test for lefties who are busily projecting their own hopes and demands onto the movement.

First, the U.S. has no bona fide left wing political presence. It's a country in which the word socialism is routinely spat out as a pejorative. Contrast that with the political situation in Canada in which the country's official opposition, the New Democratic Party, is overtly socialist. And that's not to mention the political climate in Europe and elsewhere in which left wing parties carry much more clout in the political spectrum. Now, I'm not suggesting that left wing parties are the answer to America's woes; but what I am suggesting is that Americans have no political outlet to express their left-of-center demands and desires. As a result, lefties (and even some libertarians and anarchists) have had no choice but to rally around this protest movement in a sheer act of catharsis.

Second, and very much related to the first, the United States is a two party corporatocracy in which the Democrats and Republicans merely trade-off every four years or so. Democracy in the truest sense only exists in the U.S. at a very micro or local scale, while the overarching political structure (or superstructure to borrow a Marxist term), essentially works to serve and further corporate interests. The alienating effect of this two-party teeter-totter has reached a kind of boiling point, particularly now as America is mired in a seemingly endless recession and as Americans have been inspired by social protest movements overseas.

At the same time, Occupy Wall Street can also been as a mirror of the Tea Party Movement—another political spasm that's emerged on account of the rigid two party system. The left and right are clearly polarizing in the United States. The only question is whether or not they can pull the Democrats and Republicans along with them. It doesn't appear that this will be the case.

It's difficult to predict what consequences, if any, these two movements will have on the political makeup of the U.S. and whether or not they'll be able to see their demands come to fruition.

Thank you for writing this piece. I appreciate seeing a Canadian's perspective on the event. I think you make two mistakes.

First, the description of the American two-party system oversimplifies internal disputes. Factions within the parties can serve roles similar to distinct parties in parlimentary systems. I freely admit to reasoning by analogy here. A good description of the various strains lies in Walter R. Mead's "Special Providence." You could also divide strains by region or by demographic cohort.

Second, I think you overstate the role of oil resources as a motive for war. I think in particular of Libya. Had its former regime not worked to destabilize the world order and had it not also possessed valuable oil resources, I do not think NATO intervention would have happened. (Note I wrote "would," not "should.") NATO intervention in Mexico or in Nigeria both seem unlikely, despite the presence of oil and of unrest.

The movement's auspices have expanded significantly from that starting point and now includes such things as taxing the rich, raising taxes on corporations, ending corporate welfare and personhood status, support for trade unionism, and protecting Medicare and Social Security.

Most of these things are also advocated by the mainstream of the Democratic party, and are supported by the overwhelming majority of Americans, according to polls. It shouldn't be impossible to achieve them.

It's a country in which the word socialism is routinely spat out as a pejorative.

This is mostly an issue of terminology. The premier examples of socialism in practice in the United States are Social Security, Medicare, and unemployment insurance -- programs which are virtually sacred cows to most Americans. Our people have been taught to recoil from the word socialism, but they want the substance of it.

You're right that this is quite different from the Arab spring because the circumstances of the societies are so different. I've been skeptical of the Occupier movement too, mostly because of the lack of a clear set of goals and tactics to achieve them, and because the numbers involved haven't yet reached the level needed to make a real impact (at Tahrir Square there were hundreds of thousands, not just thousands). But it bears watching. Especially as the unions are getting involved, it may evolve in a more coherent and practical direction.