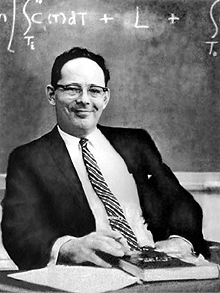 Robert Ettinger, the father of modern cryonics, passed away yesterday on July 23 at the age of 92. He will primarily be remembered for his 1962 book, The Prospect of Immortality, and his 1968 book, Man into Superman, both of which are considered pioneering works in the cryonics and transhumanist movements. From the Telegraph:


After the war he returned to teach physics at Wayne State University and at a college outside Michigan. He had begun brooding on the possibilities of cryonics in the 1930s, and was later inspired by The Jameson Satellite, a science-fiction short story by Neil Jones, about a man who has his corpse placed into orbit in the belief that the cold of outer space would preserve him.

Millions of years passed, and the human race died out. Then a race of advanced aliens came along with mechanical bodies; they took the man's frozen brain, and put it in a mechanical body.

"It was immediately obvious to me," recalled Ettinger, "that the author had missed the main point of his own story – namely that if there was any sense at all in expecting a frozen person to be revived someday, there was no point in waiting for aliens to do it in millions of years. We could do it ourselves in a very short time, and not just for a few eccentrics, but for everybody."

"We have to wait for the technology of revival. But we have to see to the arrangements of freezing ourselves, because most of us are going to die long before the technology of revival is there."
In 1947 Ettinger wrote a short story on the theme, fully expecting that other more influential people would pick up on his idea. When, by 1960, no mass freezing programme had been initiated, Ettinger wrote an essay on the subject, dealing mainly with "the insurance aspect", which he sent to some 200 people selected at random from Who's Who In America.

There was "virtually zero response", and he therefore wrote The Prospect of Immortality, which was first published privately. The sequel, Man Into Superman, appeared in 1968.

Ettinger retired from teaching in 1972, but to the end remained convinced that cryonics would catch on.

"Someday there will be some sort of psychological trigger that will move all these people to take the practical steps they have not yet taken. When people realise that their children and grandchildren will enjoy indefinite life," he said, "that they may well be the last generation to die."