Controlling your environment with thought alone 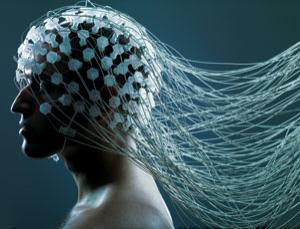 Hmm, should we call it techekinesis? The latest brain-computer interfaces are meeting smart home technology and virtual gaming. From New Scientist:


Two friends meet in a bar in the online environment Second Life to chat about their latest tweets and favourite TV shows. Nothing unusual in that - except that both of them have Lou Gehrig's disease, otherwise known as amyotrophic lateral sclerosis (ALS), and it has left them so severely paralysed that they can only move their eyes.

These Second Lifers are just two of more than 50 severely disabled people who have been trying out a sophisticated new brain-computer interface (BCI). Second Life has been controlled using BCIs before, but only to a very rudimentary level. The new interface, developed by medical engineering company G.Tec of Schiedlberg, Austria, lets users freely explore Second Life's virtual world and control their avatar within it.

It can be used to give people control over their real-world environment too: opening and closing doors, controlling the TV, lights, thermostat and intercom, answering the phone, or even publishing Twitter posts.

The system was developed as part of a pan-European project called Smart Homes for All, and is the first time the latest BCI technology has been combined with smart-home technology and online gaming. It uses electroencephalograph (EEG) caps to pick up brain signals, which it translates into commands that are relayed to controllers in the building, or to navigate and communicate within Second Life and Twitter.