Social networking as a force for radical social change? Don't believe the hype 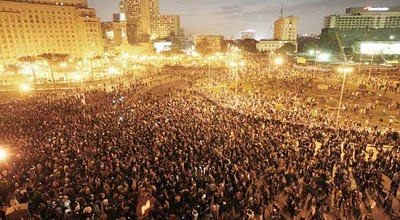 My aren't we all excited these days about the power of social networking, particularly in its apparent ability to literally topple governments. Recent events in Tunisia and Egypt have left a good number of people believing that Twitter and Facebook were the defining factors behind the fall of the despotic regimes.

Look, I'm not about to deny the power of these platforms to disseminate information. Clearly they had an impact on the public's ability to bond together and rally behind a worthwhile cause. But last time I checked, a good number of previous revolutions managed to happen without the internet.

Funny that. How'd they manage to pull that off without iPhones and TweetDeck?

Okay, here's the deal: The fall of any regime is contingent on a number of factors—but access to information is a relatively irrelevant variable. The 'rise up' meme can spread through a number of different channels and at varying rates, and given dire circumstances and a desperate populace, it most certainly will.

For revolutions to work, however, there has to be (1) a reason behind the uprising, (2) a population willing to go the distance, and (3) a government largely unable or unwilling to manage the situation.

In the case of Tunisia, for example, Mohamed Bouazizi's self-immolation was the immediate powder keg that set off a population largely stressed out by poor economic conditions, including rising food prices. That's it right there in a nutshell. 140 character limits had nothing to do with it. In turn, the success of the Tunisians was clearly an inspiration for the Egyptians who were suffering under similar circumstances.

As for the population's resolve, I'm certain that the solidarity and passion that was felt was accentuated by the social networking aspect. No doubt. But ultimately, for that resolve to flourish and strengthen over the long haul, there has to be underlying stress factors.

And with or without social networking, it's the response of the government that almost always determines the course of a popular uprising. In the case of Egypt, while it appeared that Hosni Mubarak had control of the military at all times, he willingly chose not to suppress the uprising with violent action. Ultimately, it was this restraint that led to his overthrow.

The same cannot be said for some other countries that have faced (or are currently facing) popular uprisings. Take China in 1989 for example. Does anyone seriously think that social networking would have prevented the Chinese military from unleashing machine gun fire on those students? Or that the protests would have continued afterwards?

Then there's Iran. Twenty months ago the country was littered with protesters who were in the possession of social networking tools. Yes, the sharing of information most certainly added fuel to the fire, but ultimately the uprising failed. Why? Because the Iranian government is more willing than others to brutalize its people. Moreover, the social networking aspect has unquestioningly backfired; it's almost certain that thousands of protesters who exposed themselves through these channels were later jailed and likely executed.

If the current protests in Iran or anywhere else are to succeed, it won't be on account of social networks. It will be because the populace simply refuses to tolerate their conditions, and that their resolve is stronger than the force it's up against.
Posted by George at 2/15/2011

Actually there was a report that Mubarak had ordered the units to fire on the demonstrators on Jan 29. The order was for a full attack to crush the protests.
Apparently it was the (I think) field marshalls who balked at the order and didn't follow through. Once they heard the order they called their families on cell phones to ask them what to do.
I think it was in the telegraph, or some uk paper.
Haven't heard any confirmation on that.