Getting started on the Rights of Non-Human Persons project 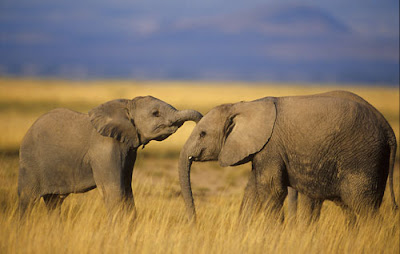 Now that we've officially launched the Rights of Nonhuman Persons program at the IEET, you can expect to see more of these discussions right here at Sentient Developments. Specifically, the questions we're asking right now include:
There are obviously many more questions to ask, but this should give you an idea of some of our launching points.

Looking at the big picture, I'd like to see it such that all nonhuman persons are protected from such things as torture, experimentation, slavery, confinement, and threat of unnatural death (i.e. hunting and murder). Ideally, I'd like to see the day when elephants are no longer forced to perform at circuses, great apes gawked upon at zoos, or dolphins confined to unacceptably small tanks at oceanariums. And so on. Essentially, the rule of thumb should be: If you wouldn't do it to a human, you shouldn't do it to a nonhuman person.

Given how many species live on this planet, it's a pretty exclusive club. And I'm somewhat on the fence about the last two, but we have to perform our due diligence to ensure that these particular species get the protections we think they may deserve.

It's also worth noting that this is a starting point. I suspect that more species will be added to this list over time. This will be an iterative process as we (1) gain public acceptance on the issue and normalize the concept of nonhuman personhood, (2) create legal precedents and enact laws, and (3) learn more about the neurology and behavior of other nonhuman person candidate species so that they can also be included.

And although not a priority right now, we will also be considering the potential for nonbiological personhood. We foresee the day when an AI or brain emulation ceases to become an object of experimentation and instead becomes an agent worthy of moral consideration. We're not there yet, but we want to be ready for that eventuality.

It's also important to think about realizable and tangible goals. While we have a lot of work to do—and lots of minds to change—we should strive for nothing less than the actual achievement of our mission. I'm confident we'll get there. I suspect that the initial breakthrough will see great apes protected first, followed by dolphins. We're pretty much ready to conceptualize and accept these species as being persons; it's a relatively easy sell.

I'm wondering if by personhood, you mean equal rights. With equal rights comes equal responsibilities. For instance, we know that in the wild chimps kill other chimps, elephants kill other elephants,and dolphins kill other dolphins. If they are deemed of equal moral worth to a Human being, than one non-human person killing another non-human person would be murder. Should they be charged for murder? How would they be tried? If on the other hand a chimp is deemed not to be morally accountable for kinslaying, then they would not truly be our equals.

I personally like to classify beings as non-sentient, sentient, quasi-sapient, and Sapient. With the exception of parrots and cephalopods, I consider your candidates for personhood quasi-sapient, and deserving of the rights you list above. I say quasi-sapient because they are still of sub-human intelligence and I do not believe they could participate on par with Human beings in a Human society. As for any post-human intellects, it will be up to them to decide how to treat us.

To answer my own question, I don't think you could meanigfully hold a chimp responsible for murder.

Short answer: Like small children and disabled peoples, nonhuman persons would not be accountable for their actions in this way. But they would have the same sorts of protections we afford children and the disabled.

I didn't know we gave reduced penalties to criminals who were disabled, I knew that we put insane criminals on medication or in therapy instead of prison or death.

Face it, by our standards most animals are downright sociopathic. Only exception I can think of being Bonobos.

We are tigers, not great apes. You can say to me, "If you help me swim across the river, I won't eat you because then I will drown". But, I know better because you are a tiger.

Jain monks and nuns walk barefoot and sweep the ground in front of them to avoid killing insects or other tiny beings.

The problem is when you think you have the right to give rights to others, in order to enforce those rights you need an institution to have the power to take away rights.