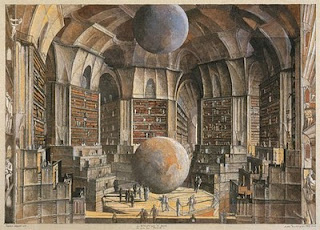 There's a great review article by Freeman Dyson in the New York Review of Books, who provides a summary of James Gleick's new book, The Information: A History, a Theory, a Flood. It's a somewhat longish article, but worth the read; information theory continues to be a particularly fascinating era of inquiry:

The explosive growth of information in our human society is a part of the slower growth of ordered structures in the evolution of life as a whole. Life has for billions of years been evolving with organisms and ecosystems embodying increasing amounts of information. The evolution of life is a part of the evolution of the universe, which also evolves with increasing amounts of information embodied in ordered structures, galaxies and stars and planetary systems. In the living and in the nonliving world, we see a growth of order, starting from the featureless and uniform gas of the early universe and producing the magnificent diversity of weird objects that we see in the sky and in the rain forest. Everywhere around us, wherever we look, we see evidence of increasing order and increasing information. The technology arising from Shannon’s discoveries is only a local acceleration of the natural growth of information.
..............

The vision of the future as an infinite playground, with an unending sequence of mysteries to be understood by an unending sequence of players exploring an unending supply of information, is a glorious vision for scientists. Scientists find the vision attractive, since it gives them a purpose for their existence and an unending supply of jobs. The vision is less attractive to artists and writers and ordinary people. Ordinary people are more interested in friends and family than in science. Ordinary people may not welcome a future spent swimming in an unending flood of information. A darker view of the information-dominated universe was described in a famous story, “The Library of Babel,” by Jorge Luis Borges in 1941.3 Borges imagined his library, with an infinite array of books and shelves and mirrors, as a metaphor for the universe.