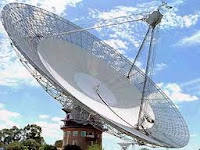 A group of physicists from the University of Kansas are concerned that there's been virtually no work done to date on developing a messaging protocol to assist in the search for extraterrestrial intelligence (SETI). Their approach, which is the non-passive METI approach (i.e. sending messages to outer space in hopes of interception), would include constraints and guidelines for signal encoding, message length, and information content. It would also specify a transmission strategy suggesting a simple physical or mathematical language with the signal repeated regularly to avoid being overlooked as noise.

Among their suggestions, the physicists noted that transmissions should use either 1.42 GHz or 4.46 GHz frequencies to coincide with radio frequencies commonly observed in nature, while assuming "modest technical capabilities" of an extraterrestrial receiver. Frequency, pulse and polarisation signal modulation techniques should also be considered to maximise the probability of detection.

They also suggested the establishment of a website through which members of the public could create sample messages that conformed to the protocol, and retrieve and attempt to decrypt messages by other users.

"A METI protocol is needed in order for a unified and international effort to be made in messaging extraterrestrials," they conclude, "By carefully constructing a framework by which to write and send messages, we will optimize the quality of messages as they are broadcast and increase the probability that we are understood."

Check out the abstract as seen in the journal, Space Policy:


Messaging to extraterrestrial intelligence (METI) is a branch of study concerned with constructing and broadcasting a message toward habitable planets. Since the Arecibo message of 1974, the handful of METI broadcasts have increased in content and complexity, but the lack of an established protocol has produced unorganized or cryptic messages that could be difficult to interpret. Here we outline the development of a self-consistent protocol for messaging to extraterrestrial intelligence that provides constraints and guidelines for the construction of a message in order to maximize the probability that the message effectively communicates. A METI protocol considers several factors including signal encoding, message length, information content, anthropocentrism, transmission method, and transmission periodicity. Once developed, the protocol will be released for testing on different human groups worldwide and across cultural boundaries. An effective message to extraterrestrials should at least be understandable by humans, and releasing the protocol for testing will allow us to improve the protocol and develop potential messages. Through an interactive website, users across the world will be able to create and exchange messages that follow the protocol in order to discover the types of messages better suited for cross-cultural communication. The development of a METI protocol will serve to improve the quality of messages to extraterrestrials, foster international collaboration, and extend astrobiology outreach to the public.

I wonder why a lot of people spend a lot of time on extra-terrestrial communication protocoles, as there is extremely low probability to be able to communicate, even in a near proximity of the galaxy.

I wonder why so many people are working on extraterritorial communication protocols, as there is almost no chance to be able to communicate with another civilization even in our galaxy.