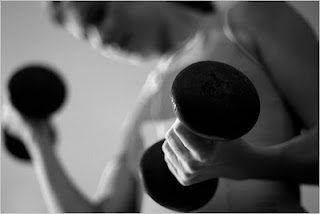 According to the New York Times, voluntary wheel running with a load increases muscular adaptation and enhances gene expression in rat brains indicating that this kind of exercise may have the identical or even more useful neurological effects than endurance training.


Whether the same mechanisms occur in humans who undertake resistance training of one kind or another is not yet fully clear, but “the data look promising,” said Teresa Liu-Ambrose, a principal investigator at the Brain Research Center at the University of British Columbia. In results from her lab, older women who lifted weights performed significantly better on various tests of cognitive functioning than women who completed toning classes. Ms. Liu-Ambrose has also done brain scans of people who lifted weights to determine whether neurogenesis is occurring in their brains, and the results, still unpublished, are encouraging, she said.

The brain benefits from being used, so that, in a neat circle, resistance training may both demand and create additional brain circuitry. Imagine what someone like Einstein might have accomplished if he had occasionally gone to the gym.