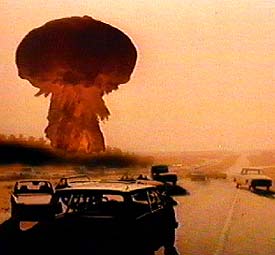 The Obama administration is now suggesting that in the event of a nuclear attack it is better to take shelter than to flee. Get inside any stable building and don't come out until officials say it's safe. From the NYT:


A nuclear blast produces a blinding flash, burning heat and crushing wind. The fireball and mushroom cloud carry radioactive particles upward, and the wind sends them near and far.

The government initially knew little about radioactive fallout. But in the 1950s, as the cold war intensified, scientists monitoring test explosions learned that the tiny particles throbbed with fission products — fragments of split atoms, many highly radioactive and potentially lethal.

But after a burst of interest in fallout shelters, the public and even the government grew increasingly skeptical about civil defense as nuclear arsenals grew to hold thousands of warheads.
...

The Department of Homeland Security financed a multiagency modeling effort led by the Lawrence Livermore National Laboratory in California. The scientists looked at Washington, New York, Chicago, Los Angeles and other big cities, using computers to simulate details of the urban landscape and terrorist bombs.

The results were revealing. For instance, the scientists found that a bomb’s flash would blind many drivers, causing accidents and complicating evacuation.

The big surprise was how taking shelter for as little as several hours made a huge difference in survival rates.

“This has been a game changer,” Brooke Buddemeier, a Livermore health physicist, told a Los Angeles conference. He showed a slide labeled “How Many Lives Can Sheltering Save?”

If people in Los Angeles a mile or more from ground zero of an attack took no shelter, Mr. Buddemeier said, there would be 285,000 casualties from fallout in that region.

Taking shelter in a place with minimal protection, like a car, would cut that figure to 125,000 deaths or injuries, he said. A shallow basement would further reduce it to 45,000 casualties. And the core of a big office building or an underground garage would provide the best shelter of all.

Wow, I'm glad this bit of advice is considered a "game changer." I'm sure you feel much better now knowing this.
Posted by George at 12/16/2010

Are they expecting one soon....?

And I was just arguing about how Fallout (the games) shouldn't be taken seriously.

Oh, yes, I feel loads better now. And I'm sure Herman Khan is snickering in Hell...or wherever.

Beyond the closest blast radius a nuclear bombs effects become like a hurricane or strong wind combined with some fire and heat problems.

A blast-wave overpressure of 5 pounds per square inch, which is associated with winds around 150 miles per hour, is enough to destroy wood-frame buildings and
cause severe damage to brick apartment buildings. However, with simple and cheap construction improvements and retrofits it is possible to enable all wood-frame buildings to survive 5 PSI. Further construction improvements can increase the survivability of buildings and the people inside them.

Hurriquake nails add $15 to the price of a home and make a house 50% more resistant to a hurricane or strong winds (or over pressures from a nuke).