Senior athletes and the longevity link 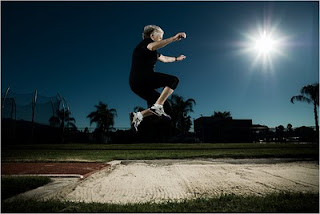 Cool NYT article, "The Incredible Flying Nonagenarian," about the rise of senior athletes and accompanying efforts to study the factors for their success--studies which could have implications for longevity research and future therapies:


Scientifically, this is mostly virgin ground. The cohort of people 85 and older — the fastest-growing segment of the population, as it happens — is increasingly being studied for longevity clues. But so far the focus has mostly been on their lives: the foods they eat, the air they breathe, the social networks they maintain and, in a few recently published studies, their genomes. Data on the long-term effects of exercise is only just starting to trickle in, as the children of the fitness revolution of the ’70s grow old.

Though the world of masters track offers a compelling research pool, Taivassalo may seem like an unlikely scientist to be involved. Her area of expertise is mitochondrial research; she examines what happens to the body when mitochondria, the cell’s power plants, are faulty. Her subjects are typically young people who come into the lab with neuromuscular disorders that are only going to get worse. (Because muscle cells require so much energy, they’re hit hard when mitochondria go down.) Some researchers now see aging itself as a kind of mitochondrial disease. Defective mitochondria appear as we get older, and these researchers say that they rob us of endurance, strength and function. There’s evidence that for young patients with mitochondrial disease, exercise is a potent tool, slowing the symptoms. If that’s true, then exercise could also potentially be a kind of elixir of youth, combating the ravages of aging far more than we thought.

Be sure to read the entire article and learn about Olga Kotelko, a 91 year old athlete who can run the 100 meter dash in 23.95 seconds -- which is faster than what's currently being run in the 80 year old classifications. You go, girl.
Posted by George at 11/29/2010