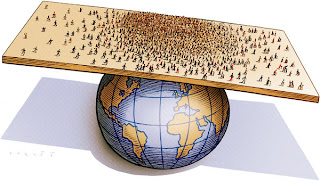 A rather sobering article from the New York Times: "The Financial Time Bomb of Longer Lives":


Unless governments enact sweeping changes to age-related public spending, sovereign debt could become unsustainable, rivaling levels seen during cataclysms like the Great Depression and World War II...If the status quo continues...the median government debt in the most advanced economies could soar to 329 percent of gross domestic product by 2050. By contrast, Britain’s debt represented only 252 percent of G.D.P. in 1946, in the aftermath of World War II...

Serious stuff—and not the kind of thing we can just sweep under the carpet. Despite the warnings, the Times offers some solutions:
And on that last note, the article ends with a great quote: "In the long run, I’d like to see age irrelevance where people aren’t just labeled by their birthdays.”

How nice to see extended health calving off from the transhumanism glacier and melting into the sea of mainstream thought.