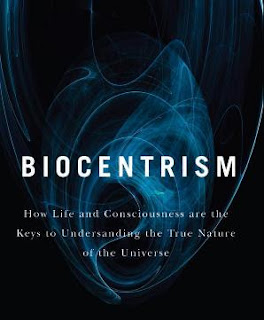 Cool book by Robert Lanza and Rob Berman: Biocentrism: How Life and Consciousness are the Keys to Understanding the True Nature of the Universe. Those unfamiliar with Lanza's particular take on biocentric theory should read this, but he essentially suggests that the Universe is a consequence and construct of conscious observers and not the other way around; it's the quantum realm and the subjective perception of time that "creates" a comprehensible Universe to dwell in. Consequently, argues Lanza, there may be a link to cosmological immortality.


Critics claim that this behavior is limited to the quantum world. But this "two-world" view (that is, the view that there is one set of laws for quantum objects and another for the rest of the universe, including us) has no basis in reason and is being challenged in labs around the world. Last year, researchers published a study in Nature suggesting that quantum behavior extends into the everyday realm. Pairs of ions were coaxed to entangle, and then their properties remained bound together when separated by large distances ("spooky action at a distance," as Einstein put it) as if there were no time or space. And in 2005, KHCO3 crystals exhibited entanglement ridges half an inch high, demonstrating that quantum behavior could nudge into the ordinary world of human-scale objects.

In the Oct. 2010 issue of Discover, theoretical physicists Stephen Hawking and Leonard Mlodinow state, "There is no way to remove the observer -- us -- from our perceptions of the world ... In classical physics, the past is assumed to exist as a definite series of events, but according to quantum physics, the past, like the future, is indefinite and exists only as a spectrum of possibilities."

That night, while lying awake at my neighbor's house, I had found the answer -- that the missing piece is with us. As I see it, immortality doesn't mean perpetual (linear) existence in time but resides outside of time altogether. Life is a journey that transcends our classical way of thinking. Experiment after experiment continues to suggest that we create time, not the other way around. Without consciousness, space and time are nothing. At death, there's a break in the continuity of space and time; you can take any time -- past or future -- as your new frame of reference and estimate all potentialities relative to it. In the end, even Einstein acknowledged that "the distinction between past, present and future is only a stubbornly persistent illusion." Life is just one fragment of time, one brushstroke in a picture larger than ourselves, eternal even when we die. This is the indispensable prelude to immortality.

Probably more metaphysics than physics at this point, but interesting food for thought. I've always been fascinated by theories and philosophical systems that start from the presence of the observer—perspectives like Buddhism and even fine tuning arguments. Indeed, as Buddhism suggests, the most important phenomenon in the Universe is subjective awareness: if nothing is observed there is nothing.

This ties in with what Eckhart Tolle is saying: "Your life can never be not now."

As I said before, physics, generally science, is a human artefact and a social phenomenon. This includes the concept of time. "We" constructed the concept of time, and, in a certain sense, time itself. What we use as "time" is not there without us, and has not been there before us, like stones, flowers, rabbits, and stars. It's not necessary assuming that a "real" time "exists out there in nature". This alone, by the way, does not tell anything about us as observers being part of physics or not.

By the way, what really annoys me, is the continuing and inflationary quoting of Einstein. On the web in many cases people try to immunize their position against being criticized by misusing Einstein as a authority.

And this -- "the distinction between past, present and future is only a stubbornly persistent illusion" -- is not a true statement of physics, let alone a statement of physics at all. Here we have a pedestrian Einstein. This quote should not be used -- and, as far as I can tell, was not meant to be used -- in a physics discussion. Blame on Robert Lanza!

Amusin philosophy, but it's funny how he goes from defending his claims using scientific observations to essentially stating things that make him feel good as truth ("after death you can take any new time as your reference point").

I never really understand this use of uncertainty to explain any mystical theory the author believes. Yes we change the universe when we interact with it, but only because our measurements (usually shooting light waves and such at particles) disturb it. Uncertainty is a property of the observing minds, not the universe itself.