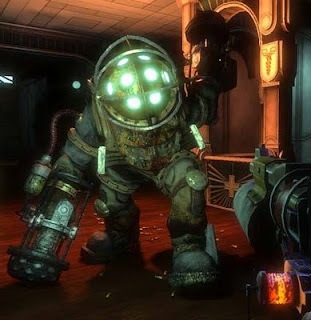 The interwebs are angry because Roger Ebert, a film critic who knows virtually nothing about video games, is arguing that video games will never be considered an artform. Grant Tavinor of Kotaku takes a more nuanced approach to the question and uses the popular BioShock video game to make his case:

Hence, BioShock seems an entirely natural candidate for art status. It has, in some form, all but one of the criteria. The one it lacks-belonging to an established artistic form-it lacks because of the very newness of video games. BioShock is not necessarily a masterpiece (the last act is problematic) but this is beside the point; the vast majority of art works are not masterpieces. Surely it would be unfair to deny BioShock art status when it has so many of the qualities that in other uncontested art works accounts for their art status?

I agree that part of the problem is the nascent status of video-games-as-art. Pacman never attempted to be artist; Bioshock clearly does. It's still early days.

Moreover, even if you dismiss current games as having any artistic merit, Ebert's claim that they will never be legitimate artforms is suspicious. Never? Really? Not even when augmented reality enters the picture? Or completely immersive virtual reality?

Even more profoundly, a number of years ago I speculated about the potential for directly altering subjective and emotional experience and how mental manipulation could become an art form. In the article, Working the Conscious Canvas, I wrote:

Imagine this same technology, but in the context of video games. Now there's some scary potential.

Art, whether it be traditional or novel, has always been about transcending the individual and sharing the subjective experience of others. As I've written before, "The greatest artists thrill us with their stories, endow us with emotional and interpersonal insight, and fill us with joy through beautiful melodies, paintings and dance. By doing so they give us a piece of their selves and allow us to venture inside their very minds—even if just for a little bit."

Is there anything we do that can't be considered as an art form?

I guess I view art too broad perhaps, my simples definition of art currently is anything we do that changes the physical universe in any way can be seen as art to others...


While this broad perspective may include nearly everything, I will even go as far as calling "thought" patterns as a form of art...

Imagine a machine capable of turning our thoughts into sounds and images, bridging the cap of canvas and thought without a single paint stroke. If can think it you can manifest it via image drawing and painting, after all isn't Art the origin of thought?