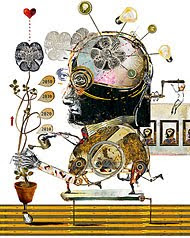 I'm sure most of you have caught this by now, but the New York Times recently published a 5,000 word article about the Singularity University, Ray Kurzweil, and the technological Singularity. All the usual suspects are referenced within, including the IEET's James Hughes, Terry Grossman, Peter Thiel, Peter Diamandis, Andrew Hessel, Sonia Arrison, and William S. Bainbridge.

A taste of the article:

Richard A. Clarke, former head of counterterrorism at the National Security Council, has followed Mr. Kurzweil’s work and written a science-fiction thriller, “Breakpoint,” in which a group of terrorists try to halt the advance of technology. He sees major conflicts coming as the government and citizens try to wrap their heads around technology that’s just beginning to appear.

“There are enormous social and political issues that will arise,” Mr. Clarke says. “There are vast groups of people in society who believe the earth is 5,000 years old. If they want to slow down progress and prevent the world from changing around them and they engaged in political action or violence, then there will have to be some sort of decision point.”

Mr. Clarke says the government has a contingency plan for just about everything — including an attack by Canada — but has yet to think through the implications of techno-philosophies like the Singularity. (If it’s any consolation, Mr. Long of the Defense Department asked a flood of questions while attending Singularity University.)

Mr. Kurzweil himself acknowledges the possibility of grim outcomes from rapidly advancing technology but prefers to think positively. “Technological evolution is a continuation of biological evolution,” he says. “That is very much a natural process.”

Disturbing fact revealed in the article: Google and Microsoft employees trailed only members of the military as the largest individual contributors to Ron Paul’s 2008 presidential campaign.

For a curious and infuriating response to the NYT article, be sure to check out Pete Shank's "A Singular Kind of Eugenics," but be warned: the bullshit factor is off the charts (e.g. Shank is terribly confused about the history of transhumanism, particularly the role and evolution of the Extropy Institute, the World Transhumanist Association, Humanity+ and the Institute for Ethics and Emerging Technologies).
Posted by George at 6/24/2010

Care to elaborate how the "bullshit factor" is exemplified ("eg") in a "confusion" about ExI, WTA, and H+? All he says is that WTA *replaced* ExI, and in sheer numbers and simple crowd dynamics, it did (there is no suggestion that WTA replaced ExI in any formal sense).

I hardly see how that article is infuriating. In fact, I find the claim that Singularity University is primarily "not a university and not even about Singularity. It's a corporate networking and seminar operation, and most of the clients attending its latest course were primarily interested in 'figuring out their next business venture or where they wanted to invest'" to be spot on.

Andrew Orlowski, a techie journalist who is a long-standing critic of "utopian nonsense," says:

"The Singularity ... is rich people building a lifeboat and getting off the ship."

Is also spot on considering my criticism of Peter Thiel, one of the sugar daddies of SIAI.

@Martin this is implying that technological/specialized universities and university programs in general don't behave like that elsewhere?

I don't have any issues with Shank's take on SU, it's his lumping together of ExI, IEET, WTA and H+ that bothers me. Like so many other critics, Shanks refuses to distinguish between technoprogressives and the libertopian types. He paints a disturbingly simplistic picture of these organizations and the people involved.

Oh, and H+ Magazine is not defunct.