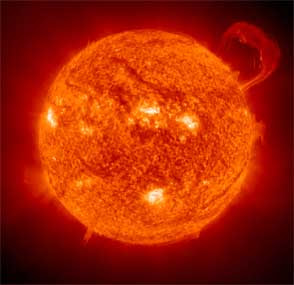 As if we didn't already have enough to worry about, NASA is now warning of space storms that could spawn devastating solar flares. The Telegraph UK reports:

Scientists believe it could damage everything from emergency services’ systems, hospital equipment, banking systems and air traffic control devices, through to “everyday” items such as home computers, iPods and Sat Navs.

Due to humans’ heavy reliance on electronic devices, which are sensitive to magnetic energy, the storm could leave a multi-billion pound damage bill and “potentially devastating” problems for governments.

“We know it is coming but we don’t know how bad it is going to be,” Dr Richard Fisher, the director of Nasa's Heliophysics division, said in an interview with The Daily Telegraph.

“It will disrupt communication devices such as satellites and car navigations, air travel, the banking system, our computers, everything that is electronic. It will cause major problems for the world.

“Large areas will be without electricity power and to repair that damage will be hard as that takes time.”

Dr Fisher added: “Systems will just not work. The flares change the magnetic field on the earth that is rapid and like a lightning bolt. That is the solar affect.”

You always scare me the most, George. Keep up the good work!