I've often thought that cryonics, the practice of storing tissue (namely the brain) in a vat of liquid nitrogen, may eventually come to be seen as a rather primitive and naive technique for preservation. While it may be the only current option for those hoping to capture and restore their brain states for future reanimation, cryonics as a concept may not stand the test of time. More sophisticated methods have already been proposed, including warm biostasis and plastination.

While warm biostasis remains a largely theoretical endeavor, brain plastination was recently given a considerable boost through the founding of the Brain Preservation Foundation. Launched by Accelerating Studies Foundation founder John Smart and Harvard neuroscientist Ken Hayworth, the BPF is seeking to facilitate the development of any technology that will effectively preserve the brain for eventual reanimation. While the foundation members' pet interest is in plastination, they are not married to any particular technique. As far as they're concerned, the successful development of any kind of brain preservation technology means that everyone wins.

To this end, the Foundation has launched the Brain Preservation Technology Prize – a prize for demonstrating ultrastructure preservation across an entire large mammalian brain and verified by a comprehensive electron microscopic survey procedure. Think of it as an X-Prize for brain preservation technology. The Foundation wants to encourage researchers to develop techniques “capable of inexpensively and completely preserving an entire human brain for long-term storage with such fidelity that the structure of every neuronal process and every synaptic connection remains intact and traceable using today’s electron microscopic imaging techniques.”

The current purse is for $100,000, but they expect this prize amount to increase as donors chip-in. And in anticipation of success, the BPF has created a Brain Preservation Bill of Rights. 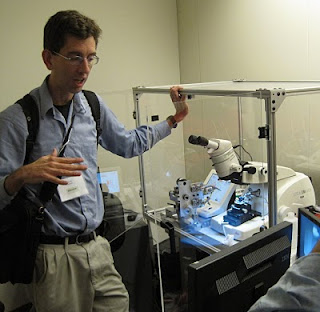 As noted, the BPF has a special interest in brain plastination, mostly on account of Smart and Hayworth's extensive work in this field. If you've ever seen seen a Body Worlds exhibit, then you know about plastination. It is thought that brain-state may be preserved through the chemical conversion of brain matter into a non-degradable substrate, which is why the proposed technique is also referred to as chemical brain preservation. For example, it might be possible to flood a brain shortly after death with glutaraldehyde to fix proteins, followed by osmium tetroxide to stabilize lipids and other compounds. Essentially, this process could turn a deceased brain into a chunk of plastic that will last indefinitely.

Smart envisions the day when this technology is refined and streamlined to the point where preservation may cost as little as $2,000. Not a bad price for a radically extended life. 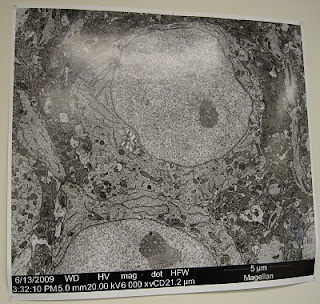 I recently had the opportunity to speak with Smart and Hayworth about their project at the Humanity+ Summit that was held in early June. A few of us conference attendees were given an informal guided tour of Hayworth's lab at Harvard. It is here where Hayworth uses electron microscopy to delineate every synaptic connection from plastinated mouse brains, a process that preserves both structure and molecular level information. Essentially, while they're working on technologies to preserve, image, and analyse mouse brains--an essential step toward a whole mouse brain connectome--Hayworth and his team are developing the theory and technologies that will be required to preserve human brains as well. 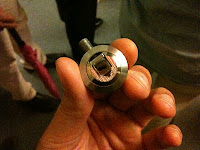 The tour of Hayworth's lab was jaw dropping on many levels. Not only did I get a chance to see slides of brains at the nanometer scale, I got a chance to see real researchers doing real work in a real lab. It's transhumanism under construction; this wasn't airy-fairy armchair futuristic fantasy - this research is actually happening.

Hayworth noted that, "Over the next decade or two these or other techniques will be developed and will allow the creation of a synapse-level atlas of the entire human brain - something that has been dubbed the 'human connectome'." As for mind uploading from a plastic embedded brain, Hayworth believes that's about 50 years off.

Make a donation to the Brain Preservation Foundation today. Your life may depend on it.
Posted by George at 6/29/2010

I'm only doing this if it's reversable, the whole "pattern-identity" thing is based on a horrible misinterpretation of biology.

It makes sense that he also pursues a Bill of Rights because I think this approach only works well if there is no delay between pronouncement of legal death and start of procedures. I wrote a bit about this here:
http://www.depressedmetabolism.com/2010/01/28/brain-preservation/

I wished he would not have called it the *Mind Uploading* Bill of Rights because chemopreservation does not necessarily require mind uploading for meaningful resuscitation. Why sell a more controversial package than needed?

Having said this, I greatly support this project because it is another nail in the coffin of the conventional definition of death.

It seems to me that "unpreserving" things, especially living things, would be extremely difficult.

If they're not in some form of stasis, living things are basically electrochemically interacting with itself in various ways at all times. Changing the structure into something inert would shut this off. It seems like to be very effective, you'd somehow need to change it back and then kickstart multiple "channels" of electrochemical interaction in a very short period of time - minutes at best, and possibly even seconds.