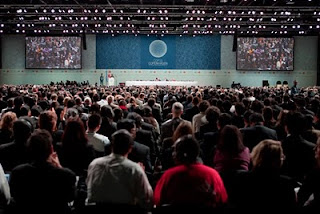 I'm still reeling from the rather anticlimactic finish to the recent Climate Change Conference held in Copenhagen. Like so many others, I was hoping for an internationally binding deal that would, at the very least, compel and motivate the nations of the world to address the climate crisis in a meaningful and precedent setting way.

But it was not to be. The immediate reasons for the conference's failure are complex and laden with the political and economic realities of our time (e.g. settling on exact targets and incentives). But these reasons are part of a deeper malaise that is currently paralyzing the countries of our warming planet. As this crisis is revealing, our social and political institutions are ill equipped to deal with a pending catastrophe such as this.

More specifically, there are basically five 'bird's eye view' reasons that can account for the conference's failure:

1. Nation-states are far too self-serving: Countries don't like to be told what to do, and when push comes to shove it's far too easy for them to hide behind the sovereignty shield. Instead of acting proactively and with leadership, many nations (particularly those in the developed world) are 'aligning' themselves with what other countries are doing. No more and no less. And seeing as no one is doing anything....well, there you have it. Compounding this problem is the realization by some countries that they aren't going to be too negatively impacted by climate change -- a disturbing reminder that nation-states are unwilling to deal with threats that are not considered local.

2. Democracies are too ill-equipped and irresolute to deal with pending crises: A reader of mine recently complained that the people of the world were not being consulted on what they feel should be done about climate change. Well, this would only work if the 'people of the world' were universally educated about the intricacies of the issues (including scientific, economic, cultural and political considerations) and disarmed of their petty selfishness and local biases. This isn't going to happen anytime soon, and consulting the Joe the Plumbers of the world on something as multi-faceted and complex as climate change is probably not a good idea. Moreover, like the politicking politicians who supposedly represent them, the masses have shown a tremendous unwillingness to deal with a problem that has yet to show any real tangible negative effects.

3. Isolationist and avaricious China: One thing that the Copenhagen failure revealed is that China's isolationism is alive and well--even as they emerge as a global superpower. They're going to go about this whole global warming thing on their own terms, whatever that's supposed to mean. This unilateral approach is particularly disturbing considering that they're the largest manufacturing state in the world and house a massive population that will soon start to demand first-world standards of living. And exacerbating all this is the communist Chinese system itself with all its corruption and lack of accountability and due process.

4. The powerful corporatist megastructure: As the onset of last year's economic crisis so beautifully illustrated, capitalism, if left to its own devices, will eat itself. This is because corporations don't act rationally or in a way that would indicate foresight or a desire for long-term self-preservation. Moreover, corporations will never voluntarily deal with a seemingly ethereal and controversial problem, especially one that requires a dramatic reduction of profits.

5. Weak consensus on the reason for global warming: Global warming denalists are no longer the problem. What's of great concern now is the growing legitimacy of anthropogenic climate change denialists -- those individuals who believe that global warming is a natural phenomenon. This is a particularly pernicious idea because it absolves humanity from the problem. Adherents of this view contend that human civilization is not responsible for the changes to the Earth's climate and that as a consequence we don't need to fix anything--we can keep on spewing carbon into the atmosphere with reckless abandon. This idea is particularly appealing to politicians who use it as a convenient escape hatch.

I'm inclined to think that the only way the nations of the world will band together and act decisively on this issue is if an actual climate-instigated disaster happens--one that touches all international stakeholders in a profound way. But even this isn't guaranteed as there will always be global disparities in terms of impact.

Part of the problem right now, aside from the intangibleness of it all, is that some countries will be impacted more than others, a prospect that will ultimately lead to the rise of a new geopolitical stratification: different regions (both inter- and intra-national) will experience the effects of global warming differently, whether it be coastal areas, those dealing with desertification or those having to contend with the exodus of climate refugees.

Given the failure of Copenhagen, I'm inclined to believe that semi-annual conferences are not the way to go. Instead, I'd like to see the United Nations assemble an international and permanent emergency session that is parliamentary in nature (i.e. representative and accountable) and dedicated to debating and acting on the problem of anthropogenic climate change (a sub-parliament, if you will). The decisions of this governing board would be binding and impact on all the nations of the world. The chances of outright failure (like the one in Copenhagen) would be significantly lessened. Instead of ad hoc conferences, the emergency sub-parliament would conduct a series of ongoing debates over proposed legislation that would ultimately result in internationally binding agreements.

The current climate problem has caused the emergence of another crisis, namely a crisis-of-resolution. Failure at this point is not good enough. What's required is something more respective of the dire situation we're in.
Posted by George at 1/07/2010

Well, duh. I'd be shocked if the results were anything else.

Also, there's this little problem where some of the Anthropogenic Global Warming deniers have been accusing their opponents of not actually believing the views they promote, and that AGW is just a cover for an attempt to sneak more socialism into the government. And socialism is, of course, eeeeevil, even socialists know this, they just want to totally like hurt people or something.

If global warming is a myth then it's not doing a very good job of capturing the imaginations of the emission heavy nations who for God's sake have every right to keep whistling to the same economic beat of modernity we once grooved to.

The future is ephemeral. Only a mythic story will help it become entirely clear.

But it seems the economic clocking in and out, is spewing more waste into our lives than we can possibly handle as beings who desperately need some humanity plus.

I'd love some C-SPAN footage of these potential debates that you're proposing George. Let me know when it comes into fruition.

You could argue that Katrina was a global warming disaster, but how would you prove it. Short of waiting for the Maldives to sink.

I would pay good money for front row seats to watch the right react to your parliament.

It's just one example of how the current political system has outgrown its usefulness. The scientists, technicians and engineers will take it from here.

Climate change will end up being solved with geoengineering, after reality has provided the ultimate proof that it is real.

The main competing theory for 20th century warming is solar variation as best evidenced by a strong correlation with characteristics indicating causation. (3) Recently, solar cycling has slowed which may mean it will be "the lowest of any cycle since 1928". (4) A slew of recent news reports indicates the last two to three winters have been particularly cold. (5)

Now, I know that most people are still saying that CO2 theory skepticism is "a particularly pernicious idea" but, just for discussion sake, let's say that it turns out that it's the solar cycle after all. At what point should that be determined and what penalties should there be for all of those climate scientists, scientific organizations, politicians, news reporters, and bloggers who got it wrong and played a role in perpetuating the prostituting of science?

More accurate to say that some businesses oppose action, while those that have the most concentrated interest to lobby governments for action don't exist yet.

If you follow the work of Bruce Bueno de Mesquita (game theory prediction), then this result would have been apparent several months ago. I had covered it in Sept 6, 2009.

The de mesquita analysis also tells you how the climate change issue plays for years and decades based on Business As Usual.

Get away from fossil fuels and clean them up as much as possible. Also, the black carbon (soot) is air pollution and is the easier and cheaper and faster to clean up than CO2.

6.9 billion humans and counting and this is a "dire situation"!

This planet is pretty sweet. Some species don't know when they have got it good!