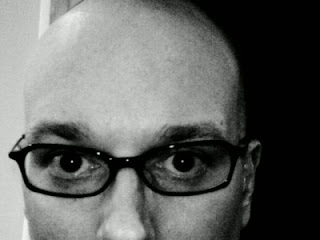 Our relationship got off to a rather fiery start.

Back in 2006 I discovered that a prominent UFOlogist had been linking to a number of articles on my blog. Even more startling was the realization that the blog in question, Posthuman Blues, was an effort to bridge transhumanist discourse with that of the UFOlogists.

Eager to break the memetic linkage between the two seemingly disparate schools of thought, I penned the article, "Unidentified Flying Idiots." It was typical of my rants, a vitriolic diatribe directed against a group of know-nothing X-Files zealots who were giving legitimate scientific studies a bad name.

And my angst was directed at the head perpetrator himself: Mac Tonnies. In the article I wrote:

Tonnies’s legitimate content is offset by his misguided focus on UFOlogy. As a result, the transhumanist movement may have a harder time gaining public acceptance and support with this kind of negative association.

I’m sorry, folks, but you can’t have your cake and eat it to. You can’t choose and pick the science that appeals to you and then attempt to tie it in with bogus and unfounded speculations. It's like Fox Mulder in the X-Files who has a poster on his wall which reads, "I want to believe." Well, I also want to belive in UFOs. I also want to belive in Jesus and the tooth fairly, but wanting to believe in those things ain't gonna make it so.

Needless to say it did not impress the UFOlogists who reacted by hammering me in the comments and through emails -- including Tonnies who remarked, "A very poor showing, George. I'm as leery of the lunatic fringe as anyone -- probably more so than many people unfamiliar with the UFO inquiry. But the whackos -- and they are legion -- don't define the very real questions posed by UFOs and related phenomena."

You'd think that would be the end of it, but it actually marked the beginning of a three year relationship, one that ended tragically this week with Mac's untimely death.

Rather than dismiss each other outright, we maintained a civil correspondence over the years. Neither of us wavered from our positions, but we bonded over our shared passion for the answer to one simple question: What is the true nature of extraterrestrial life? Moreover, we felt that the answer to this profound question resided somewhere within futurist studies. By trying to look deep into humanity's future we both thought that we could unveil some clues about the makeup of advanced extraterrestrial life. 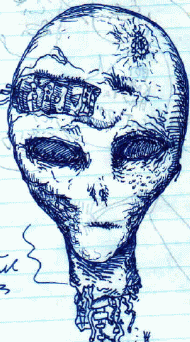 But where I considered such things as Von Neuman probes and Dyson Spheres, Tonnies looked to flying saucers and little green men. To be fair, though, Mac's viewpoint was more sophisticated than that. "I'm uncomfortable with the concept of "belief" when dealing with unusual topics such as UFOs," he wrote, "Technically, no, I don't "believe" in UFOs (in the sense that UFOs require any sort of faith). But it isn't necessary to "believe" in UFOs in order to discuss them meaningfully; empirical evidence shows that UFOs (whatever they are) exist. There are plenty of professional "skeptics" who will refute this. But there remains a core phenomenon that begs disciplined study."

There's no question that his views were 'out there.' Mac argued that aliens once resided on Mars and that they currently dwell among us.

But despite these fringe views, Mac's futurism was closely aligned with that of the transhumanists (another group often accused of being 'fringe'). Tonnies contended that,

Consciousness is a potential technology; we are exquisite machines, nothing less than sentient patterns. As such, there's no convincing technical reason we can't eventually upload ourselves into matrices of our design and choosing. It's likely the phenomenon we casually call "intelligence" will cease to be strictly biological as we begin to merge with our machines more meaningfully and intimately. (Philip K. Dick once wrote that "living and nonliving things are exchanging properties." I suspect that in a few hundred years, barring disaster, separating the animate from the inanimate will probably be an exercise in futility.) Ultimately, we have two options: self-mutate by venturing off-planet in minds and bodies of our own design, or succumb to extinction.

Tonnies thought he was on the right side of science and history. "I spend an inordinately large portion of my time pursuing unpopular ideas and esoteric theories with what I sincerely hope is balanced skepticism," he wrote. The perpetual outcast, Tonnies envisioned himself as being the true skeptic.

Mac and I never really did see eye-to-eye when it came to our theories on the true nature of extraterrestrial intelligence, but our differing viewpoints didn't get in the way of our mutual respect. We became good friends via social media, with Twitter acting a great go-between. We frequently sent each other links and article ideas that didn't quite fit into our own communities and we regularly riffed off each other's sites. Deep down inside I think we both hoped that, through open and mature discourse, our ideas would eventually sway the other. But it was not to be.

I will sorely miss Mac's posts and unwavering commitment the problem that is the Great Silence.

And I'm devastated to know that he will never take part in the future he so often dreamed of.
Posted by George at 10/23/2009

I always enjoyed reading Posthuman Blues - such a colorful and exuberant blog. I had a few exchanges with Mac via Twitter; he seemed every bit a charming man. It's clear from what people are writing that he was regarded warmly by friends and readers alike. Like you, George, I couldn't go the distance with him on some of his intellectual sojourns, but I came to respect the spirit of honesty with which he proceeded. And he was a damn fine writer, to boot. We've been talking about him all day over here. You are missed, Mac!

Maybe he will be part of that future, his intelligence patterns are in the web, are alive in a wide way. Maybe, just maybe, he will be back and so do we.

My condolences, he will be missed.

No offense George but out of all the futurist bloggers he was my favorite. Primarily because he dealt with the weird and bizarre stuff everyone else wont touch.

Im glad you had an interesting relationship with him, in fact your blog is how I discovered posthumanblues.

What a terrible lost :*(

Sorry to hear about another person dying young.

Quite a few people in the news lately dying young from heart conditions. It's frightening that the heart is a muscle in the human body that has to keep working perfectly all the time or you drop dead. Unfortunately Mac is a warning that it can happen to any of us anytime.

It's possible that a simple cocktail of supplements could drastically cut risks from heart aliments. Since I have a couple of risk factors for heart disease, I will share my own 'hack' - a cheap daily cocktail that other transhumanists might want to consider:

There is evidence that each of these on its own cuts risk of heart aliments by 25%. (Google for research details). If they have a combinatorial effect the cocktail of the above 4 elements could cut risk by more than half (1.25^4=2.44).