The Bright Side of Nuclear Armament 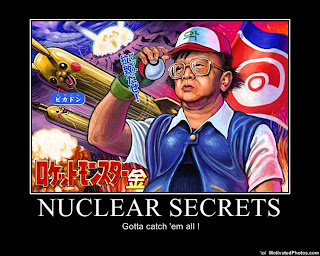 Casey Rae-Hunter is a guest blogger for Sentient Developments.

Today's e-edition of the always thought-provoking Foreign Policy magazine had the usual roundup of articles on America's dicey diplomacy with Iran and the Afghanistan Question, which at this point can be summarized by the famous Clash song. The news roundup also featured a couple of articles on nuclear proliferation, including a contrarian piece by John Mueller called "The Rise of Nuclear Alarmism: How We Learned to Start Worrying and Fear the Bomb — and Why We Don’t Have To." How could I resist a provocative title like that?

The article posits that history would've dumped us in more or less the same place with or without the Bomb. That statement alone is sure to ruffle some feathers. But Mueller's assertion that nuclear weapons didn't even serve as a deterrent is in direct defiance of conventional military-historic wisdom.

Nuclear weapons are, of course, routinely given credit for preventing or deterring a major war, especially during the Cold War. However, it is increasingly clear that the Soviet Union never had the slightest interest in engaging in any kind of conflict that would remotely resemble World War II, whether nuclear or not. Its agenda mainly stressed revolution, class rebellion, and civil war, conflict areas in which nuclear weapons are irrelevant.

Nor have possessors of the weapons ever really been able to find much military use for them in actual armed conflicts. They were of no help to the United States in Korea, Vietnam, or Iraq; to the Soviet Union in Afghanistan; to France in Algeria; to Britain in the Falklands; to Israel in Lebanon and Gaza; or to China in dealing with its once-impudent neighbor Vietnam.

In fact, a major reason so few technologically capable countries have actually sought to build the weapons, contrary to decades of hand-wringing prognostication, is that most have found them, on examination, to be a substantial and even ridiculous misdirection of funds, effort, and scientific talent.

It's certainly difficult to disagree with his last point, particularly when backed up by the sobering fact that, "during the Cold War alone, it has been calculated, the United States spent enough money on these useless weapons and their increasingly fancy delivery systems to have purchased somewhere between 55 and 100 percent of everything in the country except the land." Basically, that money could've bought cradle-to-grave health care for my uninsured countrymen several times over. Makes me proud to be an American.

Mueller also suggests that status quo thinking on nuclear armament has led to appalling strategic blunders, including the Iraq War:

For more than a decade, U.S. policy obsessed over the possibility that Saddam Hussein's pathetic and technologically dysfunctional regime in Iraq could in time obtain nuclear weapons (it took the more advanced Pakistan 28 years), which it might then suicidally lob, or threaten to lob, at somebody. To prevent this imagined and highly unlikely calamity, a war has been waged that has probably resulted in more deaths than were suffered at Hiroshima and Nagasaki combined.

And North Korea? Forget it. The payloads in their current weapons would, if detonated in the middle of New York's Central Park, "be unable to destroy buildings on its periphery," according to Mueller.

Though I lack the time and resources to independently verify his contentions, Mueller's central question is worth considering: What are we ultimately achieving with our nuclear fever-dream? Are we securing peace, or merely investing a long-dreaded boogeymen with an endless supply of neurosis? How big will we allow this beast to get? When will it fulfill those dark fantasies with which we keep it so well fed?

I'm not so sure that we should just kick back while Iran builds and tests a nuke. Nor should we stop using North Korea's weapons program as leverage in an international call for openness and reform. Nuclear blackmail is a two-way street. Where tyrants and theocrats seek to exploit their lust for the Bomb to create insecurity, America and its allies should be free to explore options that would limit the effect of such brinksmanship. Yet we would be well-advised to heed Mueller's message: by playing into nuclear paranoia, we add to the general shakiness of some already iffy geopolitical situations.

It may very well be the case that obtaining a nuclear weapon is, as Mueller claims, "substantially valueless," and a "very considerable waste of money and effort." Now who's gonna tell Ahmadinejad?

Casey Rae-Hunter is a writer, editor, musician, producer and self-proclaimed "lover of fine food and drink." He is the Communications Director of the Future of Music Coalition — a Washington, DC think tank that identifies, examines, interprets and translates issues at the intersection of music, law, technology and policy. He is also the founder and CEO of The Contrarian Media Group, which publishes The Contrarian and Autistic in the District — the latter a blog about Asperger's Syndrome.
Posted by Casey at 10/29/2009

As a weapon it might be next to useless, but as a prestige weapon it is invaluable. That's why Britain and France are certainly not renouncing it, or even turning it over to European Defense. And of course that's why several countries have been trying, more or less successfully, to acquire it.

I don't disagree — I just thought that the article had an interesting take on our collective psychology in regards to the Bomb, and how it may distort policy choices.