And Now, for Something Completely Different: Doomsday! 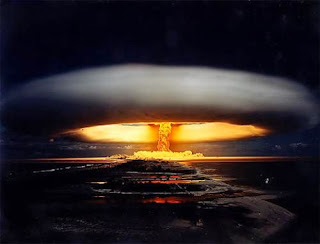 I've certainly been having a wonderful time guest blogging here at SD. In fact, it's hard to believe the month is almost up. Since I started late, maybe the boss will give me an extension?

Having talked about heavy stuff like cognitive liberty, neurodiversity and my personal stake in such matters, I figured we might want to tackle a lighter subject. Like doomsday devices.

It's probably old news by now, but I was really taken by an article in last month's issue of WIRED, called "Inside the Apocalyptic Soviet Doomsday Machine." As a child of the 1970s and '80s, I remember fondly the thrill of itemizing Soviet and American nuclear arsenals and learning cool new terms like "Mutually Assured Destruction." My parents and grandparents were not as wowed by my obsession with atomic game theory, but they put up. From forensics to German expressionist films to how many megatons are in an MX missile. . . such is life with a precocious and somewhat morbid kid.

Not to make this post purely personal, but there was another reason for my obsession. I grew up in Maine — a rural US state that one wouldn't think as having anything to do with the nuclear arms race. To the contrary: America's easternmost, northernmost province was positively riddled with backscatter radar stations, whose purpose was to detect a Soviet first strike. This made Maine more likely to be dusted in an initial attack than, say, Washington, DC. . . where I currently live.

Yet as much information as my apocalypse-obsessed mind could consume, I never encountered any tales of Perimeter — a Soviet doomsday system that came online in the mid-'80s, and is apparently still at the ready. Perimeter, also known by the more chilling moniker, "Dead Hand," is among the most secret and mystifying artifacts of the Cold War. Most perplexing is the fact that even the highest-level US officials, past and present, have no knowledge of its existence.

Yet it exists. Very much so.

The author of the WIRED piece, Nicholas Thomson, tells the tale of Perimeter with the panache of a noir novelist. He reveals, through painstaking first-person research and some rather uncomfortable interviews with Soviet and American principals, how the Ruskies devised a doomsday device that could still obliterate the US even after a devastating American first strike.

Perimeter ensures the ability to strike back, but it's no hair-trigger device. It was designed to lie semi-dormant until switched on by a high official in a crisis. Then it would begin monitoring a network of seismic, radiation, and air pressure sensors for signs of nuclear explosions. Before launching any retaliatory strike, the system had to check off four if/then propositions: If it was turned on, then it would try to determine that a nuclear weapon had hit Soviet soil. If it seemed that one had, the system would check to see if any communication links to the war room of the Soviet General Staff remained. If they did, and if some amount of time—likely ranging from 15 minutes to an hour—passed without further indications of attack, the machine would assume officials were still living who could order the counterattack and shut down. But if the line to the General Staff went dead, then Perimeter would infer that apocalypse had arrived. It would immediately transfer launch authority to whoever was manning the system at that moment deep inside a protected bunker—bypassing layers and layers of normal command authority. At that point, the ability to destroy the world would fall to whoever was on duty: maybe a high minister sent in during the crisis, maybe a 25-year-old junior officer fresh out of military academy. And if that person decided to press the button ... If/then. If/then. If/then. If/then.

Most interesting to me is the author's dead-on analysis of Ronald Reagan's "Star Wars" missile defense system, which the Soviets viewed as less of a "shield" than act of sheer provocation:

Reagan announced that the US was going to develop a shield of lasers and nuclear weapons in space to defend against Soviet warheads. He called it missile defense; critics mocked it as "Star Wars."

To Moscow it was the Death Star—and it confirmed that the US was planning an attack. It would be impossible for the system to stop thousands of incoming Soviet missiles at once, so missile defense made sense only as a way of mopping up after an initial US strike. The US would first fire its thousands of weapons at Soviet cities and missile silos. Some Soviet weapons would survive for a retaliatory launch, but Reagan's shield could block many of those. Thus, Star Wars would nullify the long-standing doctrine of mutually assured destruction, the principle that neither side would ever start a nuclear war since neither could survive a counterattack.

As we know now, Reagan was not planning a first strike. According to his private diaries and personal letters, he genuinely believed he was bringing about lasting peace. (He once told Gorbachev he might be a reincarnation of the human who invented the first shield.) The system, Reagan insisted, was purely defensive. But as the Soviets knew, if the Americans were mobilizing for attack, that's exactly what you'd expect them to say. And according to Cold War logic, if you think the other side is about to launch, you should do one of two things: Either launch first or convince the enemy that you can strike back even if you're dead.

Wow, right? I mean, I don't want to spoil it for you if you haven't yet read it, which you should.

It's interesting to note that Dead Hand is still active. Still out there, its once finely-tuned sensors decaying alongside the other relics of the ex-Soviet military/tech apparatus, waiting for seismic and communications evidence of a major strike by a fiercely cultivated enemy.

Does anyone in their right mind feel safer?

Casey Rae-Hunter is a writer, editor, musician, producer and self-proclaimed "lover of fine food and drink." He is the Communications Director of the Future of Music Coalition — a Washington, DC think tank that identifies, examines, interprets and translates issues at the intersection of music, law, technology and policy. He is also the founder and CEO of The Contrarian Media Group, which publishes The Contrarian and Autistic in the District — the latter a blog about Asperger's Syndrome.
Posted by Casey at 10/19/2009

Casey, sorry to spoil great reference to Dr. Strangelove, but what is described is not Kubricks Doomsday Machine. From Wired article:

"It would immediately transfer launch authority to whoever was manning the system at that moment deep inside a protected bunker—bypassing layers and layers of normal command authority."

And a bit later:

"The US did build versions of these technologies, deploying command missiles in what was called the Emergency Rocket Communications System. It also developed seismic and radiation sensors to monitor for nuclear tests or explosions the world over. But the US never combined it all into a system of zombie retaliation. It feared accidents and the one mistake that could end it all. Instead, airborne American crews with the capacity and authority to launch retaliatory strikes were kept aloft throughout the Cold War. Their mission was similar to Perimeter's, but the system relied more on people and less on machines."

Except that I fail to see how the Soviet system is a system of "zombie retaliation". In both cases the decision to retaliate is made by human, some lower ranking guy on duty and not by commander in chief.

I have no idea why they had to write about this ancient system now. The world is suffering Soviet scare withdrawal ?