New theory suggests that we may not be alone after all 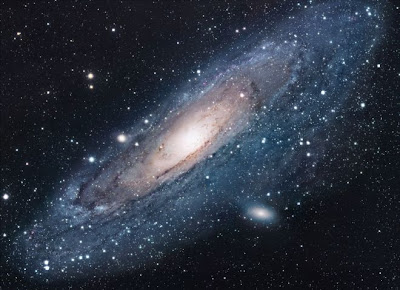 Carter's theory assumed set timescales for two processes: the life cycle of a star and the emergence of complex life. By statistically combining the two Carter concluded that complex life takes longer to emerge than the life-friendly duration of most stars -- with the implication being that intelligence is excruciatingly rare in the Galaxy and we may be alone.

Not satisfied with this conclusion, Ćirković and colleagues Branislav Vukotić and Ivana Dragićević are now disputing these assumptions. In their Astrobiology paper, "Galactic Punctuated Equilibrium: How to Undermine Carter's Anthropic Argument in Astrobiology," they contend that there is no reason to assume life evolves only gradually. They argue life could evolve in fits and starts - mirroring an evolutionary theory called punctuated equilibrium.

The abstract of their paper reads,

Our approach is based on relaxing hidden uniformitarian assumptions and considering instead a dynamical succession of evolutionary regimes governed by both global (Galaxy-wide) and local (planet- or planetary system–limited) regulation mechanisms. Notably, our increased understanding of the nature of supernovae, gamma-ray bursts, and strong coupling between the Solar System and the Galaxy, and the theories of “punctuated equilibria” and “macroevolutionary regimes” are in full accordance with the regulation-mechanism picture. The application of this particular strategy highlights the limits of application of Carter's argument and indicates that, in the real universe, its applicability conditions are not satisfied. We conclude that drawing far-reaching conclusions about the scarcity of extraterrestrial intelligence and the prospects of our efforts to detect it on the basis of this argument is unwarranted.

In plain English, the conditions in the Universe required for the emergence of intelligent life have only recently been established (in cosmological scales). Prior to 'recent times', universal mechanisms were in place to continually thwart the evolutionary development of intelligence, namely through gamma-ray bursts, super novae and other forms of nastiness. Occasional catastrophic events have been resetting the "astrobiological clock" of regions of the Galaxy causing biospheres to start over. "Earth may be rare in time, not in space," they say. They also note that the rate of evolution is intimately connected with a planet's environment, such as the kind of radiation its star emits.

This is why the authors reject a strict uniformitarian approach; the Universe is not the same now as it was in the past.

And importantly, given the possibility that the conditions for intelligence to emerge are now in place, we shouldn't give up hope about our chances of discovering extraterrestrial life.
Posted by George at 7/10/2009

Moreover, calculating the conditions necessary for the development of intelligent life assumes that such life-forms will be relatively similar to us, especially the assumption that it will be carbon-based. That's rather anthropic and presumptuous of us.

Cerkovic has more interesting and original papers than anyone, but he's still a SETI-optimist (I'm not). All he's done this time, bless his heart, is to posit yet more ways to kill off intelligent life. But his good news is that maybe those hypothetical bad times are over. Always the optimist.

Kepler already has two months of data and they presumably have thousands of transits to sort out. Imagine the SETI chill if T-planet transits are scarce. Is that why there's no announcements from the Kepler team? Gee I love sounding like a conspiracy-theory nut (but I'm not).

Because I believe other intelligent life will be psychologically similar to us (for game theoretical, not biological, reasons), I have to hope that the reason that we haven't encountered other life is because it's so vastly rare or because it's just now becoming possible. I don't want there to be some psychological trap that will kill us all. So, from that perspective, this sort of thing makes me happy. And since I also want to meet some aliens someday (fat chance, I know) I especially like Cerkovic's view. I just wish me liking something made its truth more likely.

How is this a "new theory"? I've heard similar arguments for a long time now. I was not aware that one of the meanings of the word "new" is something like "no longer fringe".

I believe in aliens. Our best scientific theory of the world, quantum mechanics, tells us that the existence of every physically conceivable form of intelligent life is inevitable in low-density branches of the universal wavefunction.

On a more sober note, I still tentatively believe in the "Rare Earth" hypothesis. But it's fascinating to contemplate the possibility one may be wrong.

I think dolphins are more likely to discover intelligent life on other planets than humans are.

Silly presumptious humans -
how many times has the purported development of intelligence on your own planet been "delayed"?

Those who live in a glass house shouldn't throw asteroids.