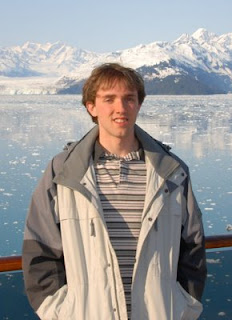 Ardent transhumanist and Humanity+ advocate Edward Miller will be guest blogging on Sentient Developments this month.

Among other things, Edward is the founder of the EmbraceUnity blog; in his mandate he states:

When attempting to combat intolerance, many have decided to “Embrace Diversity.” While fighting injustice is a noble effort, it must be based on solid ethical ground. Embracing diversity often implies that it is important to preserve separate identities based on ethnicity, nationality, religion, and so on.

Unfortunately, it is precisely those divisions that have caused much of the injustice in the first place. The human species must transcend these primitive notions and strive for unity. If we are to create a more peaceful global community, we must identify first and foremost with humanity as a whole, above any arbitrary social constructs.

The goal of this blog is to promote humanist values, and by extension, transhumanism and decentralization of power.

In addition to his work at the EmbraceUnity blog, Edward is a vocal advocate for the decentralization of power and civilizational resilience through the use of technology in innovative ways.

To this end, he is the Chief Information Officer of the Network for Open Scientific Innovation and an intern for the Institute for Ethics and Emerging Technologies. Edward has also been collaborating with the Open Source Ecology movement; he enjoys looking at the world from a systems theoretic perspective and using any insights toward utilitarian ends.

Edward is also practicing vegan and a self-described health nut. He just finished an undergraduate degree in Economics and currently works as a freelance software developer.

To get a better sense of what Edward is all about, I strongly suggest you check out his excellent presentation, "The Future of Subjectivity."

Look for Edward's posts throughout the month of July.
Posted by George at 7/01/2009

Diversity may lead to conflict but homogeny leads to death.

My concept of embracing unity is not advocating homogeneity. I am advocating a shift in consciousness, toward the humanist ideal.

I used the eye color comparison because there are many different eye colors, but people don't divide up into groups along the lines of eye color.

You might say the same about Second Life avatars or other computer avatars. People usually don't judge you based on a digital model because they know it is a freely chosen and changeable facade.

As our bodies become more like digital avatars, the humanist mindset should make more sense, though I don't think it is inevitable... humanism is still worth fighting for.

ZarPaulus, yes, diversity may be desirable in some areas of life, e.g. in the arts. But total uniformity of behaviour is presumably desirable in other areas, e.g. driving on the same side of the road.

Where do physical and mental health fall in this spectrum? On some fairly modest assumptions, abundant physical good health is desirable for everyone. Rather than ensuring bland uniformity, a future of abundant physical good health for all would maximize everyone's life opportunities. There are innumerable different ways to lead a physically healthy life. There are far narrower opportunities open to the quadriplegic.

The optimal spectrum of "mental health" is less clear-cut. IMO everyone, ideally, should have the opportunities that invincible mental health could offer. There exist a far greater diversity of life opportunities open to the psychologically robust than to the psychologically ill. But naturally there are many pitfalls to such a proposal. To give an obvious example, some of the greatest geniuses in the physical sciences (e.g. Dirac) were almost certainly Aspergers or had some other kind of autistic spectrum disorder. Their "pathology" may well have contributed to their genius. So the question of optimal diversity here is indeed (much) more complicated.